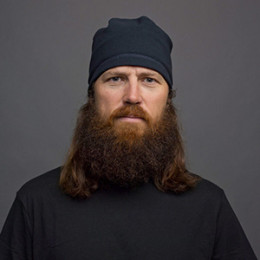 TV star, Jase Robertson is famous for her appearance in A&E reality show, Duck Dynasty. He also works as a COO of the Duck Commander, and innovator.

Jase Robertson is married to Missy Robertson in 1990 in a private ceremony attended by families and friends. They are together since 1990 and are inseparable.

The couple shares three children, two sons, and a daughter. Their son Reed Robertson was born on 15th May 1995 and another son Cole Robertson on 4th December 1997. Similarly, their last child was born in 2003 and names her as Mia Robertson.

Jase Robertson has an estimated net worth of $10 million. He is earning a good net worth and salary from his reality shows and businesses.

Jase Robertson was born on 16th August 1969 in Bernice, Louisiana to father Phil Robertson and mother Marsha 'Kay' Robertson. His father was a professional hunter and Duck Commander of his town.

Jase grew up with his three brothers Willie, Alan, and Jeptha. He loved going out to woods and hunting even by leaving his school days while he was a child. Jase is the COO of his Duck Commander business and is famous as a star of a TV reality show "Duck Dynasty."

Robertson rose to fame after getting into A&E channel's reality show "Duck Dynasty." He got attached to a rugged lifestyle from the age of eight. Jase runs his business at Duck Commander with his brother Willie Robertson and is known for his remarkably long beard and is praised for that look.

Missy works in a jewelry line along with her support in "Duck Dynasty". They got married after dating for three years. They have three children together.

Reed is also involved as a star in the TV series "Duck Dynasty." Along with TV star, he is also pursuing his music career. He sings, plays guitar and banjo, and writes songs as well.

Cole is also known to have appeared in several episodes of the A&E's "Duck Dynasty." He loves baseball and is attending high school in Louisiana.

Mia was born with cleft lip and cleft palate. She had to go through many surgeries at her young age. Her parents find her story inspiring as a child and have shared about it in their book "Blessed, Blessed...Blessed."