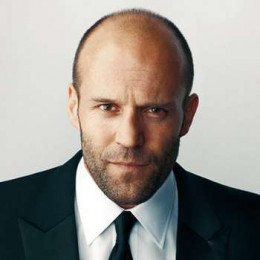 Jason Statham is known for being cast in roles in the films like Revolver, Snatch as well as Lock, Stock, and Two Smoking Barrels. He has also appeared in The Transporter trilogy and is from Shirebrook, Derbyshire, England. His parents are Eileen and Barry Statham and he has appeared in several films that have made him hugely popular. Besides, Jason is dating his wife to be Rosie Huntington-Whiteley with whom he shares a child.

Jason Statham is in a relationship with his long-time girlfriend, Rosie Huntington-Whiteley, a model, and actress. The couple started dating in 2009 and henceforth are inseparable. After dating for almost years, they finally engaged in January 2016.

Many sources claimed that the couple is already married and is living a great life as husband and wife. They, however, has not revealed anything yet.

In February 2017, Rosie annouced her pregnancy by posting several pictures on her social media. The same year, Jason welcomed his first child with his wife to be.

As of now, the whole family is living together happily.

Jason Statham has an estimated net worth of $80 million. Similarly, his wife to be has an accumulated fortune of $16million. Statham worked in films including Wrath of Man with Jeffrey Donovan.