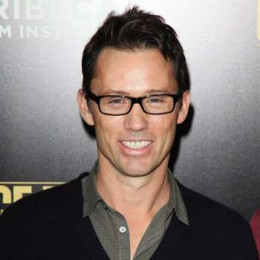 Jeffrey Donovan is a talented actor, best known for playing the role of Michael Westen in the television series Burn Notice. Till now he has starred in films such as Hitch, Comes Early Morning, Believes in Me and Changeling. He played Robert F. Kennedy in Clint Eastwood's J. Edgar. He studied aikido for over six years and Brazilian jiu-jitsu and has over 20 years of experience in martial arts.

Jeffrey Donovan was born on May 11, 1968, in Amesbury, Massachusetts, the U.S. to Nancy Matthews. He is American and belongs to the White-American ethnicity. He was raised along with his two brothers, Michael and Sean.

Donovan attended Amesbury High School where he was mentored by teacher Patricia Hoyt who helped him to start a drama club. Later, he got a private scholarship which enables him to participate in a summer program.

Then he attended the Bridgewater State College before moved to the University of Massachusetts Amherst and grabbed his bachelor degree in drama. He was a commercial driver at UMass Transit Service and he operated passenger buses as part of the PVTA.

Donovan completed his master degree from New York University's Graduate Acting Program at the Tisch School of the Arts.

Jeffrey Donovan started his acting career since 1995. He worked on both TV series and movies. He has appeared in several TV series including  CSI: Miami, Spin City, Monk, Millennium, Witchblade, The Pretender, Homicide: Life on the Street and Law & Order.

In 2004, he got his first break in the American remake of the British TV series, Touching Evil. He starring in Burn Notice from 2007 to 2013. He also enrolled in directing he directed a prequel film, Burn Notice: The Fall of Sam Axe. The series has lasted for seven seasons and nominated for four Primetime Emmy Awards.

Donovan has performed in the various theatre productions such as Hamlet, A View from the Bridge, An Inspector Calls, Things You Shouldn't Say Past Midnight, The Glory of Living, Toys in the Attic, On the Waterfront and many more.

Jeffrey Donovan is a married man, he tied the knot with his longtime girlfriend, Michelle Woods on August 25, 2012. The couple has a daughter, Clarie Donovan who was born in December 2012.

Jeffrey Donovan holds an estimated net worth of $10 million. He earns $135,000 per episode from his appearances in the TV series.

She is the long time dated girlfriend turned wife of Jeffrey, who by profession is a model. They are together since 2012.

She is the only child of Mr and Mrs. Donovan, who was born safe and sound in 2012.