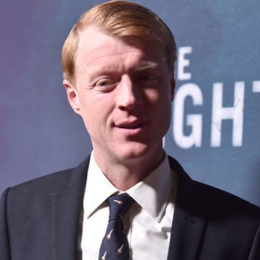 Famous American actor, Jay Paulson is one of the most popular Hollywood actor known for starring in television series like NYPD Blue, Electric Dreams. He is also popular for appearing in many films like Permanent Midnight, Go, Lucky Bastard, and Rust Creek.

Personal Life of Jay Paulson; Is He Married?

Jay Paulson married to Courtney Paulson nee Khol since 2008. The duo shares a healthy relationship and is in a marital relationship from over a decade. Paulson and his partner tied the knot on 19 July 2008 in Los Angeles after dating for a couple of years.

Famous American actor Jay Paulson in one of his photoshoots.

The couple is a proud parent of their two children, both sons named Leland Khol Paulson and Valentine Khol Paulson. The pair wants to keep their children away from the media, therefore, shares no information regarding them in the public.

The Manhattan, NY born actor and his sweetheart, Courtney are united as life partners for more than a decade. And, as of May 2020, the pair reside in Venice Beach, Los Angeles with their kids.

Jay Paulson and Courtney are mysterious kind of person who prefers to live low key life despite being renowned celebrities. Therefore, they aren't even active on social networking sites.

The cupid, however, is currently out of any dating rumors and controversies in terms of any affairs. Moreover, he seems to share a strong bond with his wife as there is no sign of divorce between them. Additionally, Jay prefers to stay out of media attention and uses none of the social media platforms.

What is the Net Worth of Jay Paulson?

Jay Paulson holds an estimated net worth of $1 million. He worked in various acting and modeling projects to collect that estimated sum. In addition, the average salary of an actor is $17.00 per hour and $81,000 per year.

Paulson debuted in the television series by working in the 1995-96 television series named Cybill with the role entitled Sean. He grabbed the attention of many directors and producers with his acting skills with the help of his first role.

After that, he worked in numerous television including NYPD Blue, Just Shoot Me!, Electric Dreams and Beyond. Besides he recently worked in two television series named I Am the Night and Catch-22 in 2019.

The Hollywood actor first appeared in the film industry by starring in 1997 film named Academy Boyz with the role of Kirk McCormick. He then, appeared in many films like Permanent Midnight, Go, Lucky Bastard, and Rust Creek. Paulson shares screen with Tessa Ferrer, an American actress in the notorous TV series Catch 22.

Jay Paulson was born on 29 May 1978 in New York City, New York, USA as Joseph Andrew Hughes Paulson under the birth sign of Gemini. Straight after his birth, his parents decided to call him Jay. Moreover, he is a private person and prefers to keep information regarding his early life within himself.

Until now, the Hollywood actor worked in more than 18 films and 35 television series. He shared the screen along with many actors like Eyles Gabel, Katharine McPhee, Jadyn Wong and many more. In addition, he stands at a decent height with a pair of blue eyes and brown hair.

Jay Paulson is currently married to Courtney Paulson nee Khol. The duo shares a healthy relationship and is in a marital relationship from over a decade. The duo tied the knot on 19 July 2008 in Los Angeles after dating for a couple of years.

Jay and his wife is a proud parent of their two children, both are sons and one of them is Leland Khol Paulson.

Jay and his wife is a proud parent of their two children, both are sons and one of them is Valentine Khol Paulson.