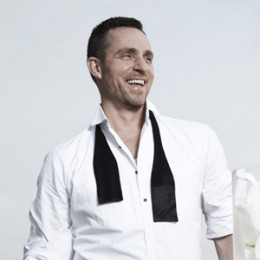 Jeff Leatham is a well-known artistic director and writer who succeeded to establish himself as an actor too. He directed the four season of the Paris-located "Hotel George V" specializing in floral designs and installations. He has also published two books named "Flowers by Jeff Leatham" and "Flowers by Design." He is openly gay and recently exchanged vows with his long-time boyfriend, Colton Haynes in Palm Springs evening ceremony.

Jeff Leatham was born on 7th September 1971, in Ogden, UT to Larry, and Janet. He grew up with his sibling, Jennifer in the countryside of Ogden. His birth sign is Virgo. Nationality-wise, Jeff is an American and belong to the White ethnicity.

Jeff Leatham served as the artistic director in "Four Seasons Hotel in Beverly Hills." Later, he released his two books, "Flowers By Jeff Leatham" and "Flowers By Design" which inspired him to publish more books.  He also appeared in television shows like; Oprah Winfrey, Martha Stewart & Queen Latifah Show.

Similarly, Leatham featured in a various TV show like; Flower Uncut, The Tyra Banks Show, Flower Uncut with Jeff Leatham and much more. In 2014, because of his contribution to French culture, he was awarded  "Chevalier de L’Ordre des Arts et des Lettres" by the French Government.

Jeff Leatham, 46, married his long-time boyfriend, Colton Haynes, an actor known for his work in American Horror Story and Teen Wolf. The duo tied the knot on October 27, 2017, at a hotel in Palm Springs, CA in the presence of their family and friends, including some fellow celebrities.

Leatham openly admits his sexual orientation as gay. The duo got engaged on March 11, 2017, at Las Ventanas al Paraiso. He often shared his pictures with his partner, Colton Haynes on his Instagram account.

But sadly, after six months of marriage, the couple filed for divorce. The couple unfollowed each other on Instagram and sparked rumors of split. According to the sources, Hayne had lost himself after the sad demise of his mother.

Soon he realized how isolated he became from his friends which created a huge rift between them.

Accounting his net worth, Jeff Leatham earns a good sum of the amount from his career. Many sources suggest his net worth is around $4 million dollars.

Colton Haynes is an American model and actor well known for his role as Jackson Whittemore in MTV’s supernatural drama series “Teen Wolf”.