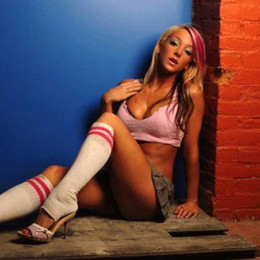 Jenna Marbles is an American entertainer and YouTube personality. She is an actress, comedian, and vlogger as well. She has earned millions of subscribers on her YouTube channel.

As of January 2018, her channel has over 2.5 billion views and 18 million subscribers. Her channel is the second most popular channel operated by a woman and is the 32nd most subscribed channel on YouTube.

Marbles was born on September 15, 1986, in Rochester, New York. She grew up in Rochester and spent most of her childhood days. He has an elder brother.

Marbles graduated from the Brighton High School in 2004. She has done master’s education in sports psychology from Boston University. Initially, she started as a writer at Barstool Sports. A single comic video which she posted on YouTube in 2010 turned into her successful career.

She created her self-titled channel on February 16, 2010. She posted her first video titled "How To Trick People Into Thinking You're Good Looking" on July 9, 2010.

Exploring her personal life, she is dating a fellow You Tuber, Julien Solomita. They are currently living together in Santa Monica, California. Other than that there has been no rumor or gossip of any kind of extramarital affair of her with anyone which suggest that she is very faithful to her current boyfriend.

The couple first met when he was hired as her personal bodyguard while she was in Ireland. Soon after they started dating and officially announced it on Instagram. The couple is now dating for around 4-years. They are also proud owners of three dogs and one hamster.

Besides her assets, her lovely dogs and hamster have a special place in her heart and family, of course.

The YouTube personality was previously dating Max Weisz. The couple first met after Max graduated from college. The duo used to feature on each other's channel and became couple goals.

But in 2012, Jenna dropped a bombshell when she announced they are no longer dating. According to her, he reportedly cheated on her.

According to many websites, her net worth is currently estimated at $4 million. Recently, she and her boyfriend Julien moved out from their rented apartment in Los Angeles and bought a new house in Santa Monica, California.

The average price of houses in Santa Monica is around  $1,765,800. Well, she definitely earns more than six figures yearly.