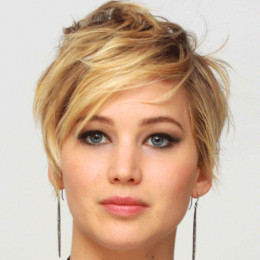 Jennifer Lawrence is an American actress who is best known for her performance in the movies like Silver Linings Playbook and Winter's Bone for which she earned several awards including the Golden Globe Award for Best Actress (Musical or Comedy) and the Academy Award for Best Actress. Her mother Karen (Koch) Lawrence is a children's camp manager and her father Gary Lawrence is a construction worker. She decided to act and make her career in it when she was 14. She has two older brothers.

Jennifer Lawrence was born Jennifer Shrader Lawerence on August 15, 1990, in Indian Hills, Kentucky, U.S. She is the daughter of Gary, a construction worker and Karen, a summer camp manager. She was raised along with two older brothers, Ben Lawrence and Blaine Lawerence. She is American and belongs to the White-American ethnicity.

During her pre-school time, her mother hasn't allowed Lawerence to play with other girls because she deemed her "too rough" with them. She attended Kammerer Middle School in Louisville. She didn't enjoy her childhood like other children because of hyperactivity and social anxiety. But her anxiety vanished after she performed on stage.

Hiiii click the link in my bio to see my plans for my next short film and ways in which you can help!!!! This film so damn important to me and I need some help to make it. Thank you!!

Lawerence used to involve in cheerleading, softball, field hockey and basketball during her school days. She was fond of horse riding and injured her tailbone because she was thrown from a horse.

At the age of 14, Lawrence went to New York City for a family vacation where she spotted by a talent scout on street. At first, her mother wasn't sure about her daughter acting but she briefly moved her family to the city to let her read for roles.

Jennifer Lawrence's Personal Life: Is She Getting Married To Her New Boyfriend?

She was in a relationship with Darren Aronofsky, a director. She said that she instantly fell for him and it was indeed loved at first sight. In an interview with Vogue, Lawrence said,

“I had the energy for him. I don’t know how he felt about me.”

They first met on the set of mother!, her upcoming film in which she stars and it is directed by Darren. She was pulled in controversy when her nude photographs were leaked on the internet.

It is apparently confirmed by Jens rep: JEN IS ENGAGED to Cooke Maroney! (pictured above)

Lawrence and Aronofsky broke up in November 2017. She started dating Cooke Maroney in 2018 who is an art gallery director on Manhattan's Upper East Side. Page Six reported that she was introduced to her current love by her friend Laura Simpson.

The Red Sparrow actress and her boyfriend got engaged in February 2019.

Talking about her net worth, she was the highest paid actress in 2016 but now she has dropped to number three, Emma Stone taking the number one spot according to Forbes list of 2017. Her current net worth is $130 million.

Check out the video she the top 10 list of 2017 highest paid actress.