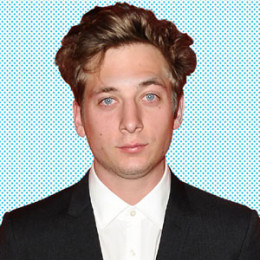 Jeremy Allen White is an American actor famous for portraying Phillip "Lip" Gallagher in PRISM Awards winning series Shameless. Apart from that, he is also known for his acting in Afterschool and Movie 43. Apart from acting, he is also a well-trained dancer, specifically in ballet, jazz and tap. His movie Afterschool was one of the successful movies that received Independent Spirit Award and Gotham Award nomination. Jeremy is dating his co-star of Shameless, Emma Greenwell. They first met on the set while filming the series and eventually started dating. It's been six long years and their bond is still together and it rumored that the lovebirds will soon get married.

Born on 18th February 1991, Jeremy Allen White grew up in the New York City along with his younger sister.

His parents moved to New York to pursue an acting career. After performing on stage together for several years, the couple got married and quit acting and moved to next profession to support their new family.

From school days, Jeremy was passionate about dancing and used to perform in different school competitions. He knows ballet, jazz and tap dance very well. At age 13, he got a chance to perform in a new middle school dance program. Later, his interest shifted to acting.

The same year, he was also seen in the TV drama, Conviction, created by Dick Wolf. He has also played in few episodes of TV drama Law & Order, Law and Order: Special Victims Unit. But his role Philip Gallagher in American comedy-drama TV series, Shameless, was praised by the critics and the viewers.

Till now, he has played over nine movies, Afterschool being his most successful movie. It is a drama movie written and directed by Antonio Campos which premiered at the Cannes Film Festival 2008.

The movie received Independent Spirit Awards and Gotham Awards nomination for Campos and won the Jury Prize for experiment narrative film at the Nashville Film Festival. His next upcoming movie is Shotgun.

Jeremy Allen is in love affair with co-actress Emma Greenwell from Shameless. The couple first met on the set of Shameless and started dating in 2011. The on-screen couple’s chemistry is really well behind the screen as well.

Though the couple is rarely present in social media, Jeremy and Emma’s love life has become everyone’s topic of interest. According to the sources, the boyfriend and girlfriend are soon to get married which is creating a buzz among their fans.

Jeremy has acted in the Shameless series from season 1 and will also continue to play the character Philip in the upcoming Season 8. The series Season 7 finale attracted 1.72 million Live+Same Day viewers. He has an annual salary of $180 thousand.

One of his American anthology comedy film Movie 43 was made in the budget of $6 million which received the box office collection of $32.4 million in the year 2013. Well, considering all this Jeremy has an estimated net worth of $1 million.