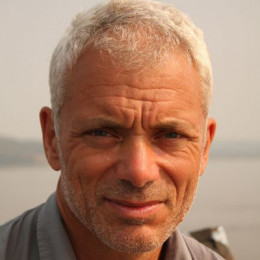 Jeremy John Wade is a popular television presenter who is best known for his TV series River Monsters and Jungle Hooks. He attended Dean Close School and from Bristol University he has a degree in Zoology and from the University of Kent he received a postgraduate teaching certificate in biological sciences. He is currently working as a secondary school biology teacher in Kent. He is not restricted for fishing anywhere around the world.

Jeremy Wade was born Jeremy John Wade on March 23, 1956, in Ipswich, Suffolk, England, UK. He is British and belongs to the White ethnicity. He can fluently speak Portuguese, French, and Spanish.

Wade attended Dean Close School and completed his schooling. Later, he graduated from Bristol University with the degree in zoology. He also did post-graduate in biological science from the University of Kent. He also served as a secondary school biology teacher while at Kent.

Jeremy Wade loves fishing since his childhood days, he used to fish along the river banks of Suffolk’s River Stour. But later, he turned his hobby into the career. He started traveling the world in search of the different distinct species of rivers available on the different parts of the world. In 1982, he made his first trip to India’s mountain river in search of the fish species.

Wade has visited different parts of the earth and mostly he trips in the Congo and Amazon rainforest as it is the tropical rainforest rich in several types of natural biodiversities. He trapped much fish and able to know their species with the help of local fishermen.

In 2014, Wade made his acting debut with the movie, Blood Lake: Attack of the Killer Lampreys as Lamprey expert. Before, the movie, he covered the Lampreys in the episode of River Monsters.

Wade also enrolled himself in authoring, he has published two books, Somewhere down the Crazy River (1994) and River Monsters: True Stories of the Ones that Didn’t Get Away in 2011.

Jeremy Wade is quite secretive about his personal life and that might be the reason, he hasn't disclosed his personal information to media. As per some online sources, he is still single and searching for his perfect match.

Wade spent most of his years and Brazil and that's why he can fluently speak Portuguese. He is known as one of the brave TV personality as he survived a plane crash, suffered Malaria and detained as a suspected spy.

Wade is okay on his own and enjoys his life in his own way. Till today's date, he is never spotted with any girls or record of dating someone. He loves fishing and has traveled in various countries. He has brought the river life into the screen and has been admired a lot by the viewers.

Wade has an estimated net worth of $1.5 million which he accumulated from his TV career and books.