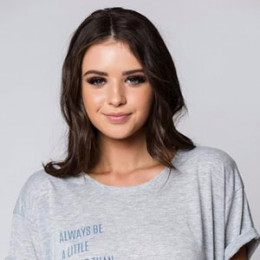 Born and raised in Australia, Jesse Conte is an Australian vlogger, singer, social media personality and beauty guru, who is well recognized for her videos on YouTube, of song covers, and challenges with her fans.

Her most watched videos on YouTube are song cover by a various celebrity like Jessie J., Justin Bieber. and Ed Sheeran. Her YouTube channel is named as 'Jess Conte.'

Jesse Conte was born on 23 July 1996, in Australia born to her father Russ Bauer and mother Grace. She also has a younger brother with her named Toby Bauer, and a sister named Sarah.

#TransformationTuesday oh my goodness! around 15 years of friendship with this chickie ?? @jess_elf

Conte is of White ethnicity and holds American nationality. Jess Conte's all family member is a musician. Hence, she was always interested in music as a child. Conte also took vocal training during her primary and middle school.

Jesse Conte began her career as YouTuber with her channel at the end of 2011. She posted her first video ''1,2,3,4" - Plain White t's in 2012. Conte continued to post different videos like beauty tips and challenges by which she gained a huge number of subscribers more than 1,589,788 subscribers.

Some of her popular videos on YouTube are song covers by celebrities like Justin Beiber, Ed Sheeran, and Jessie J. Moreover, Conte is also a skilled graphic designer and often posts pictures of her art skills on her Instagram account.

Jess Conte is a married woman. She is married to a video content creator Gabriel Conte since 2016. The pair first met via social media in 2015 December, and finally met when she traveled to Los Angeles.

Since their marriage, the pair is living a happy life and there is no any sign divorce or issues. The couple also appeared together on their vlogs.

Jess Conte earns a decent amount of money as YouTuber with her posts of song covers, beauty tips, and challenges. With more than 1 million subscribers, Conte makes up to $15,500 monthly and $185,000 annually.

The couple has also bought a new house together, however, the details regarding the house are not available. Jess Conte also owns a Jeep($60,000).

Jess Conte and Gabriel Conte first met in 2015 via social network and married after a year dating together.