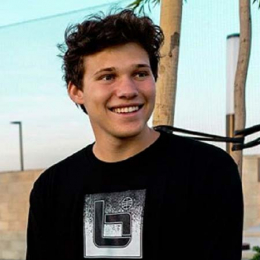 JesserTheLazer is a prominent Youtuber who posts gaming videos of "NBA 2K" and other games. This young American has created a niche for himself with over 2.2 million subscribers. This fan following is making him a brand favorite and eager to collaborate with him for promotions.

Is JesserTheLazer Dating after breaking up from Iman?

JesserTheLazer was in a relationship with his girlfriend Iman since 2018. He was quite open about his relationship and shared pictures of him and Iman on his Instagram and featured her in his Youtube videos.

Happy Valentine’s Day to everyone and especially this one

Some of the videos in which Iman featured were about Ice Skating Gone Wrong and Forfeit Basketball Vs My Girlfriend. JessertheLazer even surprised her by taking her on a trip to Hawaii. However, Jesser and Iman broke up.

The relationship of Jesser and Iman hit the rock bottom after the couple started having issues. And, in July 2020, after nearly two years of dating, Jesser and Iman parted ways. The YouTuber made a public statement on their breakup. 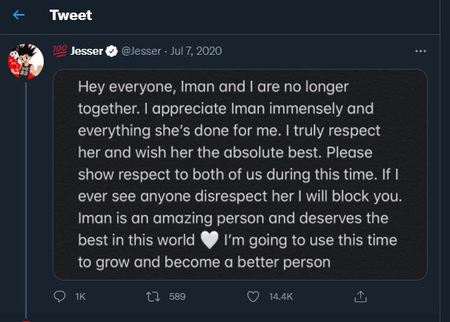 In his own words, Jesser said, "Hey everyone, Iman and I are no longer together. I appreciate Iman immensely and everything she's done for me. I truly respect her and wish her the best."

However, Jesser ended the note with a good note and concluded with, "If I ever see anyone disrespect her I will block you. Iman is an amazing person and deserves the best in this world, I'm going to use this time to grow and and become a better person."

Since his breakup with Iman, Jesser has kept his romantic life closer to his vest. It looks like, he is yet to find his special one.

What is JesserTheLazer Net Worth?

The 20-year old JesserTheLazer overall net worth is around $180k- $1million. This wealth is amassed through playing games such as NBA-2K on Youtube and from brand endorsement and merchandise sales.

JessertheLazer is an entrepreneur and produces merchandise under label BucketSquad and sells through Ballislife Store. His merchandise on average costs $25-$100. He also partners with several brands for promotions of their products on his social media platform.

JesserThe Lazer currently lives in a $2.8 million 2Hype House in California with his 2Hype members. 2Hype is a group of YouTubers who makes content related to games NBA 2K. He owns a dog named Humphrey Lazer who is of wiener breed and costs on average $200- $ 1000.

JesserThe Lazer was born as Jesse Riedel on the 27th of March 1999, in Los Angeles, California. His father Guy Riedel is a movie producer and his younger brother James Riedel is also a YouTuber who goes by the name Jiedel.

So excited for the clippers game today w/ my fam

JesserTheLazer used to make videos with his brother from elementary school and developed his skills in video making in high school. He began to gain success with Youtube videos when he still was in junior year of high school, so he skipped his senior year and instead graduated high school through passing the California High School Proficiency Exam.

JesserTheLazer did not apply for college to focus on his Youtube career, however, he does not want to work on YouTube forever and wants to give acting a chance in the future.