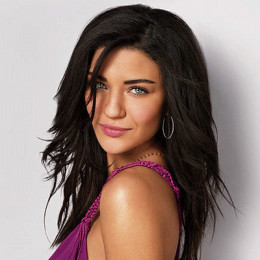 Jessica Karen Szohr is a beautiful American actress who is best known for her performance in the television shows like CSI: Miami and What About Brian. She came into recognition after being in the cast of Gossip Girl in 207. She is known for her exotic looks and charismatic eyes. She is the oldest among her parents five children. She had attended Menomonee Falls High School and was a cheerleader as well. She made her professional debut in the screen in 2003 from an episode My Wife and Kids, third season.

Szohr has been dating a boyfriend for months. She revealed about her dating life after Oscar bash on 24 February 2019 that she's crazy about her boyfriend.

Though she didn't reveal his name, she gushed about her beau at Mammoth Film Festival on 8th February 2019,

Jessica Karen Szohr was born on 31 March 1985 in Menomonee Falls, Wisconsin. She belongs to African-American and Hungarian descent.

She joined the cast of the science fiction series The Orville in 2018.