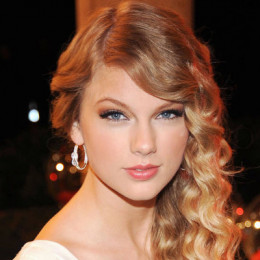 An American country singer and also a songwriter who is best known for her many hit singles like Love Story, Our Song,You Belong with Me,Fearless etc.Her father scott kingsley swift, works as a financial advisor for merril lynch and her mother Andrea, works as a mutual fund marketing executive. She completed her highschool from Wyomissing area junior/senior high school. when she was just 14 years old she signed for RCA Records.

Regarding her marital status 25 years old beautiful singer is still unmarried but she has dated many numbers of guys. The number of guys she dated till now has crossed 18. Her love life is not considered as impressive because she has dealt with a frequent breakup. She has also released many of her song which includes her feeling of tragedy in love like I Knew You Were Trouble, Blank space etc.

Taylor Swift is very talented and inspiring singer who says “no matter what happens in life, be good to people, being good to people is a wonderful legacy to leave behind.”

Taylor Alison Swift is a multi-Grammy award-winning American Singer/Song writer, who was born on December 13, 1989 in Reading, Pennsylvania, USA.

Her father Scott Kingsley Swift was a financial advisor, and her mother, Andrea Gardner Swift was a homemaker who worked previously as a mutual fund marketing executive. She has a younger brother named Austin.

Swift attended Wyomissing Area Junior/Senior High School. She became passionate about singing since an early age and joined Berks Youth Theatre Academy, performing in many musical theaters. When her career began heating up, she needed more flexibility and she switched to Aron Academy, a private Christian School that offers home schooling and completed her diploma.

Taylor started her career working with experienced song writers such as Troy Verges, The Warren Brothers, Mac McAnally and so on. Swift began performing in musical theater shows at the age of nine and at the age of 14 Swift moved to Nashville, Tennessee to pursue a career in country music. Later she signed with the label Big Machine Records and became the youngest artist ever signed by the Sony/ATV Music publishing house. Her debut album in 2006 peaked at number five on the Billboard 200 and spent the most weeks the chart in 2000.

Her lead single, Love Story was released in September 2008 topped charts on Billboard Hot 100 and number one in Australia. Her hit songs include White Horse, You Belong With Me, Fifteen and Fearless.

In 1989 Swift won three Grammy awards, for album of the year, best pop vocal album and best music video ( for Bad Blood). They were her 8th, 9th, and 10th Grammys. Overall Swift got 19 American Music Awards, 11 Country Music Awards and hundreds of other industry honors. In 2015 Forbes magazine listed her at #64 on its annual 100 most powerful Women list, making her the youngest woman ever to make the list.

And, during the pandemic time to take prevention from the deadly Coronavirus in 2020, Taylor and her boyfriend, Joe Alwyn quarantined together at the singer home in New York. Alwyn shared the pictures of his girlfriend's cat, Benjamin, on his Instagram which implied the news.

Taylor Swift began to build whopping wealth with 1896 world tour, which grossed $200million. As of August 2017, Taylor Swift earning is $280 million as per Forbes Magazine.

With over 90 million   Instagram fans followers and popular squad like Selena Gomez and Karlie Kloss, Swift has a fan base like no other. She worked on movies too, Valentine’s Day (2010), The Lorax (2012), The Giver (2014).

Taylor Swift recently launched her new song “Look what you Made me Do” in August 25 and she has partnered with UPS ahead with her Reputation album releasing on November 10.