Canadian singer, actress, as well as a songwriter, Jessica Lowndes is known for the portrayal of Adrianna Tate-Duncan in American teen drama television series, 90210. She is also famous for her songs including, Break, Flies Away, Never Lonely and Goodbye.

Canadian singer, actress, as well as a songwriter, Jessica Lowndes is known for the portrayal of Adrianna Tate-Duncan in American teen drama television series, 90210. She is also famous for her songs including, Break, Flies Away, Never Lonely and Goodbye.

In 2009, Lowndes was included in the People magazine’s World’s Most Beautiful People. She was also listed in the 100 Sexiest Women list, listed as number 58 on BuddyTV's.

Is Jessica Lowndes Dating Anyone Recently?

Widely popular for the CW's hit series 90210, Jessica Lowndes hasn't confirmed her present relationship status for now. However, her fans doubt if she is dating a celebrity hairstylist, photographer, and makeup artist Ian Maxion.

Either of the parties' socials is showered with the picture of one another. Neither Ian nor Jessica has accepted the fact in front of the media but he refers to Lowndes as his girl. Maybe, he calls her so because they've been best workout buddies or dating each other secretly.

The starlet has been dating the Olympic champion Jeremy Bloom since 2012. Her boyfriend is the co-founder of a tech film Integrate and founder of the non-profit "Wish of a LifeTime".

Jessica Lowndes shared a romantic relationship with Realtor and Surf Nerd, Tyler Stanaland. She is very open up about her relationship with Stanaland and didn't hesitate to upload their romantic pictures on her social sites. She hasn't revealed the exact date of their dating but it seems the couple is dating for a year.

Take me out to the ballgame

Previously, Lowndes was linked with comedian-actor and singer, Jon Lovitz. She even posted a picture wearing a diamond ring on her Instagram.

Later it was confirmed as a publicity stunt to give hype to Jessica's music video, Deja Vu in the headlines. In a statement, she explained,

'I love a good prank so happy early April Fools'.

The duo first met on the set in an episode of Hawaii Five-O late in 2015. Then she recruited Lovits to star in her music video.

In 2008, Lowndes had an affair with an American actor Jake Gyllenhaal. They split one year later. Soon after, she started dating Aaron Paul in 2009 whom she dated until 2010.

Below we present the interview of Jessica Lowndes.

Jessica Lowndes made her acting debut in the American anthology television series, Masters of Horror in 2005 at the age of 16 as Peggy. She then appeared in Alice, I Think, Kyle XY, e To Have and to Hold,  Pretty/Handsome.

From 2008-2013, Lowndes did the recurring role of Adrianna Tate-Duncan in American teen drama television series, 90210. While on the show, she made her musical debut and also provided her own vocals for all of the songs. 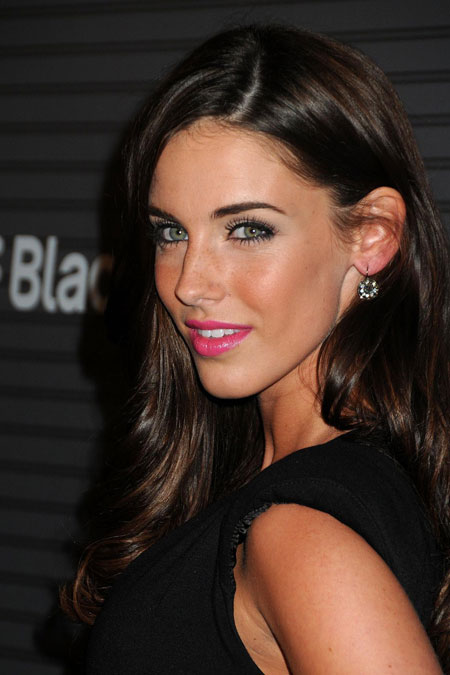 Jessica Lowndes had a keen interest in singing from her early days. She made her musical debut in the pilot episode of TV series 90210. She sang several songs for the series. In 2009, she released the song Fly Away on Myspace. The same year, she performed at the Dodger Stadium in Los Angeles, California.

In 2010, she announced she is finishing off her debut EP. Then she released another single, Undone which premiered online on May 6, 2011, and worldwide on 23rd of the same month.

Jessica Lowndes has been nominated for several awards including Canadian Screen Award, Prism Award, and Drama Multi-Episode Storyline. She earns a decent amount of money from her career as an actress and singer. Lowndes has an estimated net worth of $6 million.

In 2008, her movies, The Haunting hit the silver screen which was commercially successful. The movie grossed $15.4 million at the box office which was made under the budget of $5 million. She shared the screen with Haley Bennett, Chace Crawford, AnnaLynne McCord, Jake Weber.

Lowndes is born to Dan Lowndes and Suzanne Lowndes. Her mother was a piano teacher and her father held the teenage record for running across Canada.

Lowndes joined a private school, Pacific Academy. Since her childhood days, Lowndes was interested in dancing and singing and began to play piano at the age of 5. She got her first acting opportunity during high school. She used to produce her own music from an early age.

Lowndes also worked on a project for Showtime before her senior year which inspires her to be an actress. At the age of 16, she moved to Los Angeles, to pursue her acting career.