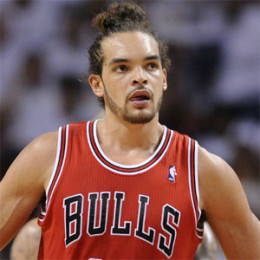 Joakim Noah, a professional basketball player. He is engaged with the New York Knicks of the National Basketball Association. He is two times NBA All-Star and is known for his high-energy play on the defensive end. He has maintained the net worth in millions.

Joakim Noah was born on 25th February in 1985 in the New York City, New York as Joakim Simon Noah. He is the son of Yannick Noah and Cecilia Rodhe. His father was a former world number 3 tennis player plus a Cameroonian-French singer and his mother was a fourth runner-up of Miss Universe in 1978.

Noah holds an American nationality belonging to the mixed ethnicity. In addition, his grandfather, Zacharie Noah is also a Cameroonian professional soccer player who won the Coupe de French in 1961. He grew up along with his three siblings Jenaye Noah, Yelena Noah and Joalukas Noah by his parents. He resided in Paris, France during his childhood days in 1988 and returned to New York City at the age of 13.

Noah completed his high schooling from the United Nations International School, where he played basketball representing the school team. He also played for the other schools including Poly Prep Country Day School and Lawrenceville School.

After the high schooling, Noah joined the University of Florida. He played for Florida Gators men’s basketball team under the coach, Billy Donovan during his time in the University. In 2006, he was declared as 2006 NBA draft at the end of the NCAA Division I Men’s Basketball Tournament and at that time was also entitled as MOP (Most Outstanding Player).

Noah started his professional basketball career in 2007. He was selected as the ninth overall pick by the Chicago Bulls in that year. He alongside his teammates Corey Brewer and Al Harford was the most selected trio in the history of NBA. In the year 2008, his team won the match with 128-127 against the Boston Celtics.

In the season, 2009-10, Noah only played 64 games because of his injury. He scored average points of 10.7 and 11.0 rebound per game. During the season, his team lost the match against Cleveland Cavaliers despite average 14.8 points and 13.0 rebounds per game by Noah.

As of 4th October 2011, Noah extended his contract with his team Bulls with the amount of $60 million. The following season was one of his least played years, as he had to undergo surgeries of the ligament damage and thumb surgeries so reached to the inactive list of games 74, 75 and 76.

Furthermore, Noah made his record of triple-double with the score of 13 points, 10 assists and 13 rebounds in 2012 playing against Milwaukee Bucks. His team made the triple-double twice after one of their teammate, Artis Gilmore in 1977.

After playing against Detroit Pistons in December 2012 Noah made high record scoring 30 points and 23 rebounds. He once again gained his triple-double in December 2012 after getting victory over the Boston Celtics. Representing his team, Bulls, he made a reserve in the 2013 NBA All-Star Game along with Luol Deng.

In January, Noah became successful to reserve himself in the 2014 NBA All-Star Game. In the same year, he along with his team won the match against the Canadian basketball team, Toronto Raptors with 100-85 scores. After playing several games, in that season he was awarded as the NBA Defensive Player of the Year 2014 and became the second teammate to get the title after Michael Jordan.

In 2015, Noah improved much and recorded as a second best player with 18 points and 15 rebounds and won the match against the Golden State Warriors. As of 2015-16 season, he played several matches and at the end required surgery so that to stabilize his left shoulder.

Moreover, after being recovered from the surgery, Noah signed a four-year contract with the New York Knicks, his hometown team with the amount of $72 million in July 2016. After that, in October 2016 he made his debut for the team playing against Cleveland Cavaliers but lost the game with 117-104 scores.

Noah was suspended for 20 games without payment on March 25, 2017, as he violated the league's anti-drug policy. He also missed the Knick's final 10 games because of the injury on his left knee. On April 12, 2017, it was considered that he will need a surgery for a left torn rotator cuff and will need 4-6 months to recover his shoulder.

Noah is married but has no children yet. He married his longtime girlfriend, Leticia Busso in an intimate ceremony with the presence of limited guests including close friends, relatives, and family. His wife, Busso is one of the former talent managers and also an event manager in New York who is currently working as a real estate agent.

Noah seems perfect in both of his professional as well as personal life too. He seems like a family person as missed his first practice session in 2016 only because of the birth of his only daughter. He posted several pictures with his adorable daughter but did not disclose her name as he seems to be a confidential person.

Noah was arrested in May 2008 for the accusation of possession of marijuana and an open alcohol container. Not only this he was also charged with driving without the suspended licensed and driving without a seatbelt for which he was sentenced to six month’s probation and was fined with $200 and $206 traffic fine.

Noah is currently at the age of 32 and stands at the height of 6 feet 11 inches. He is today one of the famous basketball players who has an estimated net worth of $20 million. He earned $13.4 million yearly from his games and matches. Moreover, in 2016, he bought a penthouse in Chelsea worth $5.8 million. This shows that he is having a great life along with his family.

Besides his earning, he is a founder of a foundation named Noah’s Arc Foundation, which helped the children to engage in arts and sports along with his mother in 2010.

Joakim Noah is currently married along with his longtime girlfriend, Leticia Busso in an intimate ceremony with the presence of limited guests. She is now working as a real estate agent in New York.

Joakim Noah and Leticia Busso welcomed their first child in 2016. He posted several pictures with his daughter but did not disclose her name to the public. She is now 1 year old and looks really adorable.