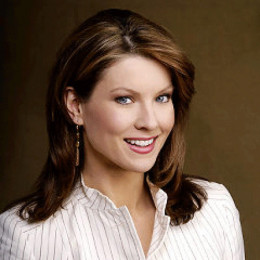 Jodi Applegate is a broadcast journalist for MSNBC as well as NBC. She is widely acclaimed for her marital relationship with Sportscaster husband Michael Kay rather than her own profession though she's a prominent TV personality too.

Jodi Applegate has been married to fellow television personality, Michael Kay. The duo tied a knot on 12 February 2011 at the Plaza Hotel. The duo began dating in September 2009 and engaged on 7 July 2010. Jodi and Michael turned their lovey-dovey relationship into holy matrimony after dating two years.

Their wedding was attended by Rudolph Guiliani. Jodi and her spouse share two children. Her children were born by Gestational surrogate. The duo's first child, Caledonia Rose was born on January 5, 2013. Similarly, their second child, Charles Applegate Kay arrived on November 12, 2014.

Applegate, her husband, and family seem to be going along very well as there haven't been any rumors about them having any problems. Neither she nor her husband has been involved in an extra-marital affair and the relationship seems to be a union which shall last.

How Much Is Jodi Applegate's Net Worth?

Jodi Applegate is a millionaire. She possesses a net worth of $5 million as of early 2020. Her primary source of income is career as a news anchor and show host.

Applegate once appeared in few movies too before she jumped into the broadcasting field. She portrayed an unnamed mother of a boy in the TV movie, A Pocket for Corduroy in 1986.

Her other movie credit includes The Bourne Legacy, Limitless, The Following, and There's a Nightmare in My Closet in 1987 and Daytime News Anchor in Opinion News Empire in 2013.

Jodi Applegate was born on May 2, 1964, in Wheeling West Virginia. She was raised in an Irish American Catholic Family at Moon Township, Pennsylvania. She is a niece in the law of Danny Aiello.

The celebrity wife earned graduation Moon Area Hugh School in 1982. In the same vein, she spent her sophomore year at Temple University, Philadelphia.

Prior to obtaining a degree in television and film from the New York University, Applegate enrolled in Temple University and the Moon Area High School. Jodi has worked for WFXT, WNYW, WRKO, WPIX, WCBS Rado apart from MSNBC and NBC.

Jodi and television broadcaster for New York Yankees, Michael Kay, have been married since 2011. Their marriage ceremony was attended by Rudolph Giuliani, former New York mayor and took place at the Plaza Hotel.

Caledonia was conceived by gestational surrogacy on 5th January, 2013.