Michael Kay has been successful to establish himself as one of the most cemented hosts and sports broadcaster of the present time. He has made a distinct name for himself and achieved countless awards and recognition for his contribution to sports broadcasting network. Journalism didn't just enrich him professionally but also helped him to find love. Let's find out how!

Michael Kay has been successful to establish himself as one of the most cemented hosts and sports broadcaster of the present time. He has made a distinct name for himself and achieved countless awards and recognition for his contribution to sports broadcasting network.

Journalism didn't just enrich him professionally but also helped him to find his beloved wife. Let's find out how!

Michael Kay is currently married to famous broadcast journalist Jodi Applegate and living as a family man with his wife and children. The duo started dating in September 2009 after they met at an Emmy award and dated for 10 months before getting engaged on 7th July of 2010.

The journalist duo got married after 7 months of engagement on 12th February 2011. Their wedding ceremony was held at the Plaza Hotel, New York and former New York mayor, Rudolph Giuliani officiated it.

Applegate looked stunning in a white empire laced dress designed by Suzanne Neville while walking down the aisle. 14-carat diamond earrings, custom silk gloves, and silk velvet cuffs added to the aesthetic appeal bride. Likewise, Kay was in a black suit while exchanging the vows.

They had their first child, a daughter, Caledonia Rose Kay on 5th Jan of 2013, and their youngest child was born on 12th November 2014. The beautiful baby boy was named Charles Applegate. Jodi conceived her children through gestational surrogacy.

Don't miss: The never-ending relationship of Journalist Alison Kosik and her husband Adam Huckett is boosted by their daughter

The couple does not shy away from the public eye and frequently post the happenings of their private life on Instagram and other social media platforms. The 14.4 thousand followers in Kay's Instagram just can't help but admire the family life, which is just a bundle of joy.

Kay and Applegate share a very happy married life together and the exit doors are nowhere to be seen. The couple is living free of any controversies with their lovely kids.

Michael Kay and his Wife: Past Relationships

Talking about previous affairs, Michael scores a perfect circle as he does not have any affair rumors but it is safe to assume that he did a spectacular job to keep his past romantic life on the down low.

Furthermore, he has never been associated with any other controversies related to his relationship status and marriage.

However, the same is not the case for Kay's wife Jody. She previously eloped with Rob Nikoleski. The former couple was expecting a baby but after a month of the circulation of the news, Jodi suffered a miscarriage.

They got divorced privately and the media still is not in clear waters as to why the divorce occurred.

You may also like: Journalist Megyn Kelly married Douglas Brunt in 2008, after a divorce with ex-husband Daniel Kendall

Kay and Applegate are living a very enriching life in each others company leaving the past behind them. They are said to be one of the most influential power couples in the States. Unlike the past marriage of Kay, this one can be safely speculated to last a lifetime. 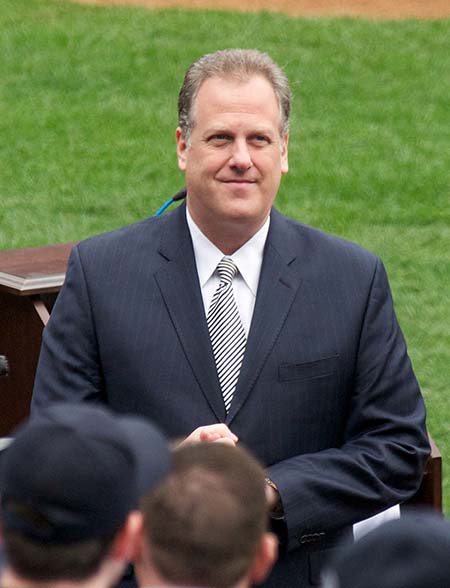