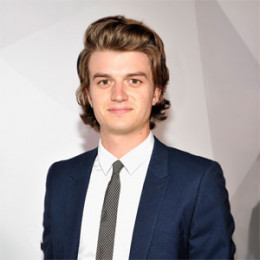 An American actor and a musician, Joe Keery is the winner of Screen Actors Guild Awards for his outstanding performance on the Netflix series Stranger Things. He began his career debut from the movie, Henry Gamble’s Birthday Party, and the series, Sirens.

Joe Keery was born Joseph David Keery on 24th April 1992 in Newburyport, Massachusetts. He is an American by nationality and belongs to White ethnicity. Keery is the only son born to five children in the family.

Keery completed his elementary and middle school at River Valley Charter School and later on, attended Newburyport High School. He was interested in acting right from a very early age, so he joined Theater in the Open, a performing arts camp at Maudslay State Park. He eventually went on to study at The Theater School at DePaul University and graduated in 2014.

Joe Keery, after graduation, gave around a hundred auditions before landing his breakthrough role in Stranger Things. At the initial phase of his acting career, he appeared in KFC, Domino’s and amiibo commercials. But, by 2015, he had already made his movie and TV series debut.

The Sirens star is currently a part of American science fiction-horror web series, Stranger Things, starring Winona Ryder, David Harbour, Finn Wolfhard, and others. The audiences and critics praised his acting, as a result, he won the Screen Actor Guild Awards in 2017. Currently, Keery is busy on his upcoming movies named, Slice, Molly’s Game by Aaron Sorkin and another movie titled Shotgun.

Besides being an actor, Keery is also a musician. He is a member of the Chicago-based garage and psych-rock band, Post Animals where he is a drummer. In 2015, his band released its debut full-length album, Perform the Most Curious Water Activities. In 2016, they released their second album The Garden Series.

Joe Keery is currently committed to his beautiful girlfriend, Maika Monroe. She is an American actress and a professional kiteboarder with whom he shares the screen in their upcoming movie, Shotgun. The couple confirmed their relationship after making a debut on the red carpet together at the Netflix show, Stranger Thing’s premiere.

Joe Keery is currently 25-year-old and stands 5 feet 11 inches (1.8m) tall. He is active in the movie industry for two years now. But, in this short time, he has gained fame and a good fan following.

On monetary terms, he made $30,000 for each episode plus bonus, for the first season of Stranger Things. Now, he is a regular in season two, probably his pay also is increased. Apart from movies and series, Keery's musical career also adds up to his net worth. Considering all his sources, he might have an estimated net worth of a million.