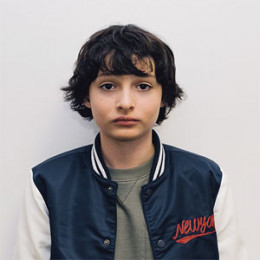 Screen Actor Guild Award winner, Finn Wolfhard is a Canadian actor and a voice-over actor who is known for his amazing acting skills. The child star who debuted in the acting industry from an American advertisement website, Craigslist is now working in numerous movies and films.

Born on 23rd December 2002 in Vancouver, British Columbia with the birth sign Capricorn, Wolfhard is a Canadian and is from the family of German, French and Jewish descent. His parents raised him along with his brother, Nick Wolfhard.

Currently, he is attending a Catholic School in Vancouver and is continuing his acting. Despite being a star, he is a down-to-earth and loves jamming with friends in his leisure.

After watching The Spiderman by Sam Raimi, Wolfhard totally got inspired and decided to begin a career in acting. Wolfhard landed his first acting job from an American classified advertisement website named, Craigslist.

After that he moved to TV and movies and made debut from Aftermath with the role of Young Charles and during the same year, he also worked in the movie, The Resurrection.

Thanks to everyone who came out to see us in Texas, Cali and Oregon. See y’all again down the road. @rohofoto

Wolfhard's first TV series was The 100 along with casts Eliza Taylor, Marie Avgeropoulos, Bob Morley, Lindsey Morgan, Richard Harmon, and others. After that, he appeared in another series, Supernatural with the role of Jordie Pinskey.

Among all his series and movies, he is best known for the series, Stranger Things. He was seen sharing the screen along with Millie Bobby Brown, Gaten Matarazzo, Caleb McLaughlin, Winona Ryder and so on.

Apart from these, he was seen in the web series in 2017 named, Guest Grumps in two episodes and also appeared in the several music videos.

He will give his voice in the Netflix animated series Carmen Sandiego which is due to premiere in 2019.

Wolfhard is currently at the age of 16. He might be currently single and has no girlfriend yet.

He is focused on his studies and career rather than other things. In addition, he even has announced via Twitter that he is not in any relationship because he is just a boy.

Wolfhard at the very early age is successful to maintain the net worth of $3 million through his acting in several TV series, movies, music videos, and others.