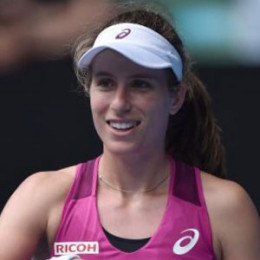 Johanna is a British professional tennis player, previously represented Australia until 2012. She is widely known for winning three singles titles on the WTA tour, also singles and four doubles titles on the ITF circuit. Konta's current boyfriend is Jackson Wade, the manager of video photography at Lawn Tennis Association. The couple started dating since Konta's victory at the Miami Open.

Johanna Konta was born on 17 May 1991. She is the daughter of Hungarian parents Gabor, a hotel manager, and mother Gabriella, a dentist. Her grandfather, Tamas Kertesz, was a player for Ferencvarosi TC in which he won two international caps for Hungary.

She spent most of her childhood in Collaroy on Sydney's Northern Beaches and was introduced to tennis there. At the age of fourteen, Konta started attended the Sanchez Casal Academy in Barcelona and spent fifteen months training.

Her parents shifted to England and settled in Eastbourne, East Sussex when she was 14. Later in the year 2012, she became a British citizen and switched her sporting allegiance from Australia to Britain. Konta's nationality became the subject to discuss at the 2016 Australian Open.

Johanna Konta won her first ITF singles in May 2008, title at a $ 10,000 tournament in Bosnia and Herzegovina, before her 17th birthday.

In the year 2009, She earned her breakthrough at the $ 25,000 tournament at Sutton, UK. She entered as a wild card, as Konta defeated the top speed Corinna Dentoni, who was ranked 153 at the time.

Later in 2010, she reached the quarterfinal of the $50,000 tournament at Indian Harbour Beach, Florida. The next week she took the title on the green clay courts of Raleigh Carolina, with another $50,000 tournament, she defeated Lindsay Lee-Waters, in a close encounter.

In April 2011, Johanna lost her three sets in the qualifying Charleston to Sania Mirza; she also fell in qualifying at Fes and Strasbourg. She reached the final draw of a WTA tour event for the first time when she qualified at Copenhagen, falling in the first round, the match lasted for two hours.

She received some welcome results in the first half of 2012, including $25,000 title at Rancho Mirage. After she had earned a British citizen, she landed a spot in the Wimbledon as a wildcard. She nearly caused an upset in her debut appearance as she nearly defeated the 28th seed, Christina McHale. Later she made her appearance at $50,000 last title at Lexington and after a month qualified for the US Open.

She won her first Grand Slam match defeating the world No. 59 Tímea Babos. It helped her to rank no. 153 in the world.

In 2013, Johanna Konta failed to qualify for the 2013 Australian Open, losing in the second qualifying round to Zhou Yimiao of China in the three sets. She played several matches, however, this year was unlucky for her, as she couldn't win any games.

Later in 2015, Konta started her career year competing for the qualifying of the WTA events in Shenzhen and Sydney. However, she did not manage to progress to either of the main draws.

Konta was eliminated in the qualifying at the Australian Open. She returned to Europe and teamed up with the British team for the Fed Cup Euro/Africa Zone Group. Olga Govortsova defeated Konta.

After that, she made her debut in the main draw at the French open against Denisa Allertova, after she won her way through qualifying without losing a set. Then she returned to the UK and was granted a wild card to the WTA Tour grass court events in Nottingham, Birmingham, and Eastbourne.

Konta made her first top 100 win record at Nottingham, in the year 2015. Her next event was held in her hometown, in the opening round she amazed Zarina Diyas, before earning a major scalp by beating the world number eight and recent Grand Slam semifinalist Ekaterina Marakova.

She made a slow start to 2016, and she was eliminated in the first round at Shenzhen. The next event saw her main draw debut at the Australian Open. Konta faced number ten Venus Williams in the opening. The match was held at Rod Laver Arena, with Johanna winning in straight sets. She backed up her win by beating Zheng Sasai and Denisa Allertova.

Later she took a short break due to Illness following the Australian Open, as she was the fourth seed for the Mexican Open in Acapulco. Then she moved to Miami and was seeded 24th, which again saw her profit from a bye to the second-round.

Following that match, Konta won several matches from a bye which she got her more popularity. Before the Australian Open, she was considered as a contender for the title, as Konta has recorded victories over Naomi Osaka and Kristen Flipkens.

Her next move led in the Fed Cup Euro/Africa Zone Group I. She won three singles matches in the round robin pool as Britain reached a promotion playoff against Croatia.

Later, after many games and victories, at 2017 Wimbledon Championships, she was seeded sixth, as she faced Hsieh Su-Wei in the starting round of a grand slam for the second time in a row, defeating her in sets.

Unfortunately, she was defeated in the semifinals by Venus Williams in straight sets.

After she had become one of the top tennis players, Konta made her appearance in advertisements also. Her clothing sponsor is 'Asics' and her racquet sponsor is Babolat. She endorses the Babolat Aero range of racquets.

Talking about her personal life, Johanna Konta is currently in a relationship with Jackson Wade. Her boyfriend is the manager of video photography at Lawn Tennis Association. The couple started dating since Konta's victory at the Miami Open.

She also earns well from endorsements contracts for sports wear, as her current estimated net worth is $ 1.2 million.