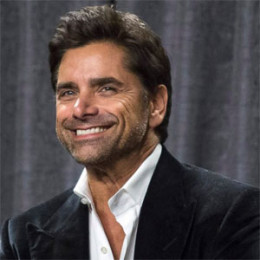 John Stamos is an American actor, producer, and musician. Started his acting career in an American drama, General Hospital, he came to recognition with his portrayal as Jesse Katsopolis on the ABC sitcom 'Full House'. He has been honored with many awards in his career which includes People's Choice Awards.

John Stamos was born as John Phillip Stamos on August 19, 1963, in Cypress, California, U.S. He is the eldest child of three children. He is the son born to Loretta (nee Phillips) and William "Bill" Stamos. His father, Bill Stamos was a restaurant owner and his mother, Loretta is a housewife.

He was raised along with his two sisters; Alana and Janeen. Nationality wise he is an American and belongs to the mixed ethnicity.

Stamos went to John F. Kennedy High School where he used to play drums in the school’s marching band. As a teenager, he helped his family in the restaurant business and he also worked in the Orange County area in the burgers house.

In 1976, he first went to Beach Boys concert which influences him to pursue his career in music and acting. His parents supported his ambitions and encouraged him to enroll himself in an entertainment fraternity.

John Stamos started his acting career with television series, General Hospital as Blackie Parrish in 1982. His character was to appear in just five episodes, but because of his breakthrough performance and audience love, his role was made a mainstay. Even he got his first Emmy nomination.

In 1984, Stamos got his first lead role in the CBS sitcom, Dreams, where he played the role of aspiring musician Gino Minnelli. He got his big career break in 1987 when he was selected to portray Jesse Katsopolis in the sitcom Full House. John is actively involved in a musical fraternity too and launched his first song  ‘Forever'.

During the 2010-11 season, Stamos appeared in the teen musical comedy-drama ‘Glee’. The series was very popular and succeeds to get 19 Emmy nomination. In 2016, he made his debut as a producer in the Netflix series, Fuller House where he occasionally reprises the role of Jesse Katsopolis.

Besides, Stamos has worked in many of the popular TV series such as Friends, Two and a Half Man, and Law& Order: Special Victims Unit.

Stamos, 54, was married but had no children from the relationship. He was married to model/actress Rebecca Romijn. They first met in 1994 at Victoria's Secret fashion show. The duo was engaged on December 24, 1997. The couple tied their knot on September 19, 1998, at the Beverly Hills Hotel.

The pair made an announcement of their separation in April 2004. He filed for divorce in August 2004. The divorce was finalized on March 1, 2005.

Stamos is currently in a romantic relationship with his long-term girlfriend, Caitlin McHugh. The duo announced their engagement on October 23, 2017. They are dating since 2015 and share a strong bond with one another.

Once in an interview, Caitlin talked about her relationship with Stamos, where she said,

“I’m very happy, he’s super supportive, and I really couldn’t ask for anything better. He’s very encouraging of anything I want to do career-wise".

She added, “I really appreciate it a lot. You don’t get that with every guy!”

John and Caitlin also welcomed their son in April 2018 and named their child, Billy Stamos.

Stamos is one the successful television stars. He stands an incredible height of 1.82 meters i.e. 5 feet 11 inches. He has successfully earned a decent amount of money from his career. He has maintained a net worth of $20 million.

Rebecca Romijn is a model who is popularly known for her association with Victoria Secret. She has done several fashion shows for several brands.