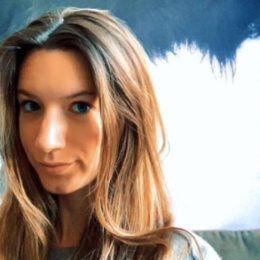 Johnna Colbry is a writer and store manager. However, she is best known as the life partner of Duff Goldman, a renowned pastry American chef, and Television personality. Johnna and her husband recently broke the headlines by welcoming their first child together.

Writer Johnna Colbry is, in fact, a happily married woman with her husband Duff Goldman. In fact, Colbry and her beloved partner Goldman are considered the best example of a power couple. Interestingly, they met through the dating app Tinder in 2016 and hit it off from there. Likewise, the rest is history. And, before taking romance to the next level, Johnna and Duff dated for three years. 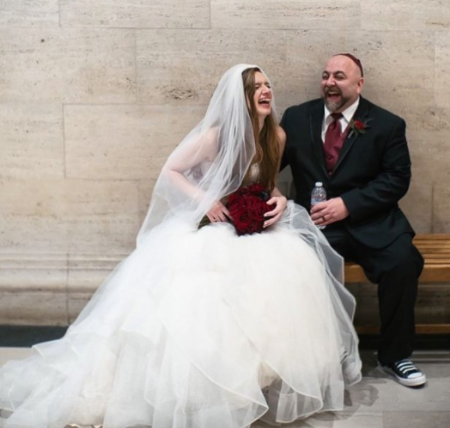 In addition, for their engagement, Duff grabbed some butcher's twine briefly to tie it on Johnna's finger. Thereafter, he got down on one knee as they became engaged on April 3, 2018. What's more? Colbry and her fiance tied the knot at the Natural History Museum in Los Angeles in January 2019. Around 250 guests attended their lavish wedding.

Believe it or not, the pair cut an impressive five cakes at their reception and some of the cakes were made completely from meat. The reception comprised a petting zoo where their wedding guests could play with exhibits put on display. 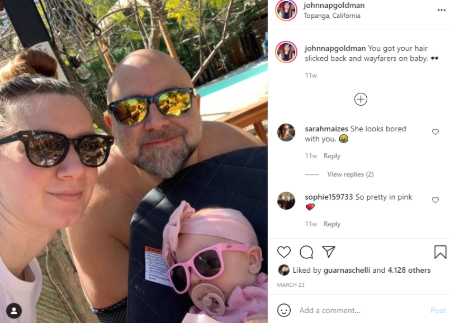 Johnna Colbry is a mom to Josephine Goldman. SOURCE: Instagram

Other than that, the couple announced they were expecting their first baby on August 7, 2020, with an adorable pictured posted on Instagram. Since then, she began sharing the delicious meals cooked by her chef husband to satisfy her pregnancy cravings. She gave birth to a beautiful daughter Josephine on January 31, 2021.

What does Johnna Colbry do for a living?

Johnna Colbry has an estimated net worth of $1 million. At the same time, her husband is worth a staggering $5 million. She received a decent amount from her career as a writer. At the moment, Colbry is a stay-at-home mom for her daughter.

She began her career as a model before becoming a sales associate for the retail company Hollister in 2011. Later on, the mom to Josephine worked as the product assistant for an online media company called We became famous in 2013.

Likewise, in February of 2014, Johnna served as the host trainer for the Rusty's Surf Ranch. After that, she was an assistant manager at a sneaker company called GREATS until she quit in January 2019.

All in all, Colbry has also worked for a clothing company named Roots. In her Instagram bio, Johnna describes herself as a writer. She is also a founder of the firm "Topanga Gold Apothecary'' which creates hand-made macrame plant hangers and sells them through online marketplace names Etsy.

Johnna Colbry is happily married to her husband Duff Goldman since 2019. They have been together for two years.

Josephine Frances Goldman is the only child of Duff Goldman and his wife Johnna Colbry. She was born on January 31, 2021.