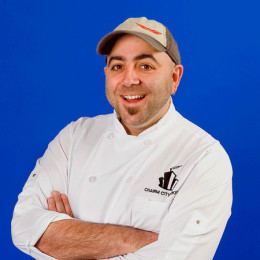 A pastry chef and television personality Duff Goldman who is widely known as the innovative ace of cakes baker on the Food Network. He was born in Jewish family. He was nicknamed as Duff when he was a baby. When he was 10 years old, his parents got divorced. In 1993, he completed his graduation from Sandwich High School. He started to work in kitchens from very young age of 14 and his first job was to work at Bagel Store at a mall. After graduating, he attended Culinary Institute of America at Greystone. He also worked as an executive pastry chef of Vail Cascade Hotel. He has also made his appearance in Food Network Challenge, Iron Chef America. Currently he is owner of Charm City Cakes which was opened in 2000.

Talking about his personal life, he has not married yet. Though he was rumored of dating his colleague Sofia Rodriguez he has not officially confirmed the rumor. It seems like he is the kind of person who loves to enjoy the single life.

My muffin is a princess.  I don’t know how I got so lucky. It must be my cooking skills. Fellas, all I can say is, learn how to cook.

He proposed his girlfriend Johanna Colbry on 2 April 2018 and the duo married on 21 January 2019.

Duff Goldman's Net Worth and Career

Goldman is the executive chef of the Baltimore-based Charm City Cakes shop.

He entered the Guinness Book of World Records for baking world's largest cupcake on 30 March 2008.

Jeffrey Adam Goldman was born on 17 December 1974 in Detroit, Michigan to a Jewish family.

His parents divorced when he was just 10.