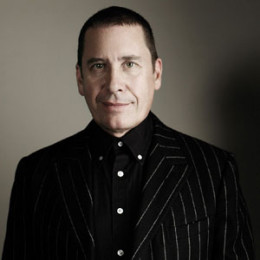 Jools Holland is an English pianist, singer, composer plus television presenter. He is most recognized for his work Later...With Jools Holland, The Tube and Juke Box Jury. Holland is married to his long time girlfriend Christabel McEwen. They have been married for almost 10 years now.

Jools Holland was born Julian Miles Holland on 24 January 1958 in Blackheath, London. He grew up with his younger brother Christopher Holland.

Holland went to Shooters Hill Grammar School in Shooter’s Hill. He also attended Royal Borough of Greenwich but was expelled for damaging a teacher’s Triumph Herald. He learned to play piano at an early age of eight.

Jools began his career when he was only 15. He used to play in clubs and pubs in South London. In 1974, he became the professional keyboardist of the band he formed with Glenn Tilbrook entitled Squeeze. The band released their first EP Packet of Three in 1977. Likewise, the band acquired millions of record sales within no time.

Later In 1978, Holland released his solo debut EP Boogie Woogie ’78. He then went on to release an array of singles.

Moreover, Holland joined the television line co-presenting the Newcastle-based TV music show The Tube with Paula Yates. He was suspended from the show for six weeks for using the inadvertent phrase 'Be There or be an ungroovey fucker' in an evening TV trailer.

He then featured in the sitcom The Groovy Fellers alongside Rowland Rivron. Afterward, he co-hosted NBC late-night television Sunday Night with David Sanborn. Furthermore, he presented a program on BBC2 in 2012. In 2017, he played at the Glastonbury Festival on the Pyramid stage along with his Orchestra featuring Chris Difford's special appearance.

Jools is a hard worker and has achieved a lot throughout his career. As a television presenter and musician, he was honored with an OBE in 2003 in the Queen’s Birthday Honors list. He was also appointed as a Deputy Lieutenant for Kent and an honorary fellow of Canterbury Christ Church University at the ceremony held in 2009.

Holland is a married man. He married his longtime girlfriend Christabel McEwen, daughter of artist Rory McEwen. The couple dated for 15 long years prior to their marriage in 2005. Their wedding ceremony was attended by the celebrities like Robbie Coltrane, Dawn French, Ringo Star, Stephen Fry, Jennifer Saunders, Andri Edmonson and Barbara Bach. The husband and wife are parents of a child, named Mabel. He has two children from his ex-wife Mary.

Being involved in the multi field of career Jools earns a lucrative amount. He has accumulated an estimated net worth of $5 million. He owns a studio entitled Helicon Mountain in southeast London, Westcombe Park area of Blackheath. His house in Kent was built in the medieval ruins of Cooling Castle.

Mabel is the only child of Jools Holland from his wife Christabel.She was born in 1991.