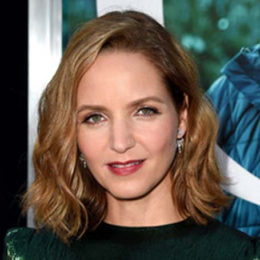 There are only a few people in Hollywood who are mastered in doing all three aspects of film making which is Acting, writing, and directing. And among all those superstars Jordana Spiro is one of the most respected and praised celebrities in America. The 42-years actress is famous for working in the Netflix series named Ozark. She is also famous for working in the television series and programs like My Boys, Cold Case, CSI: NY and many more. She made a statement by working as a director and co-writer in the American film named Night Comes On.

Personal Life of Jordana Spiro; Is she Married?

Jordana Spiro is currently married to Matthew Spitzer. The duo shares a strong bond and is now together for near one decade. Moreover, the couple dated for several years and finally shared the wedding vows among their close friends and relatives.

The pair is a proud parent of a daughter but due to their secretive nature, the couple hasn't revealed the birth year of their daughter. However, some sources claimed she was born between 2012-2016. The duo prefers to keep the information about their daughter within themselves as they do not share anything about their kid. It seems like the pair wants to secure their child's future away from the limelight.

Jordana is out of any rumors and controversies regarding any of her personal and professional life. Additionally, she is spending her days with the love of her life Matthew happily and there is no sign of divorce between them.

What is the Net Worth of Jordana Spiro?

Popular American Netflix series actress Jordana Spiro during one of her photoshoot.
SOURCE: The Famous People

Spiro made her acting debut by working in the 1999 film named From Dusk Till Dawn 3: The Hangman's Daughter as Catherine Reece. After working in the first film, the doors of the opportunities were opened for her and then she worked in numbers of films like The Goods: Live Hard, Sell Hard, The Huntress, Most Love Dogs and many more.

On the other hand, Jordana also worked in some of the hit television series like Cold Case, Blindspot, The Good Wife, My Boys and many more. Besides, she made her television screen debut by working in the 1995 American television series named Maybe This Time with a role name of Chase. Further, she also appeared in the famous Netflix series named Ozark.

The Netflix actress made her debut for working as a director and writer in the American drama film named Night Comes On. She directed and wrote the film along with Angelica Nwandu which was premiered at the Sundance Film Festival in 2018.

Jordana Spiro was born on 12 April 1977 in the New York City, New York, the United States under the birth sign of Aries. She was raised along with her four siblings, one brother and three sisters by her parents in New York City. She was from a Jewish family.

The 42-year-old actress studied at the Circle in the Square Theatre School at first. Then she joined the Royal Academy of Dramatic Art in London for her further studies. And by the start of the year 2009, she began the MFA Program in Filmmaking at Columbia University. Further, she currently resides in Los Angeles and New York accordingly to her work. Moreover, she is an active person Twitter and has garnered over 4.3k+ followers in the same social media platform.

Jordana Spiro is currently married to Matthew Spitzer. The duo shares a strong bond and is now together for near one decade.