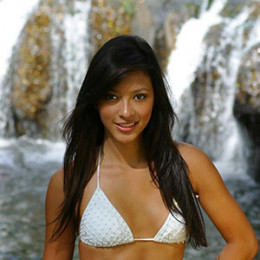 One of the famous pop singer, songwriter and model, Jordyn Taylor is best known for the song "Accessory" which was included in the soundtrack for the film Confessions of a Shopaholic. Taylor, an LA native, signed a record deal with Manta Productions at the age of 15. In 2014, Taylor wrote a blog stating that she was taking a break from recording music for a living. She continued that she would continue to record and share music when the timing was right for her.

She was previously in a five-year relationship with a guy who died in a car accident in September 2011, which inspired some of the songs in her first two albums. And currently, she is in a dating relationship with comedian and The Daily Show host, Trevor Noah, since 2015. They have together toured some of the great places in the world. Noah took Taylor to Johannesburg, South Africa, to visit his family. During that time, both posted about their adventures in the rainbow nation on Instagram.

Taylor was born on 14th November 1990 in Albuquerque New Mexico. She is the daughter of Elayne Braff and Jason Braff. She has an older brother, Justin Braff, and a younger brother, Mikey Braff. She is of Filipino descent. While she was growing up, Taylor participated in various singing competitions throughout Southern California.

Taylor was fifteen when she was signed by Manta production for her every single music. She has even worked together with some of the great artists. Some of her popular albums include Jordyn Taylor (2012), and Shine (2013), while some of her singles include Female Intuition (2010), Never Again (2012), Set Me Free (2013), and It's VABENE (2013). In 2014, she stated in a blog that she is taking a break from music.

Jordyn Taylor is in a relationship with Trevor Noah. The two started dating in June 2015 after Noah moved to New York. Allegedly, the pair met at one of his comedy gigs. The couple shares a luxury duplex penthouse on the Upper West Side of Manhattan. Taylor is a California native, but she moved to New York to be closer to him.

Taylor appears to be incredibly supportive of Trevor's career. Earlier, she was in a relationship with her former boyfriend Vincent Guiliano, who died in a freak car accident in 2011. His passing inspired multiple songs in both of her musical albums.

Meanwhile, Trevor Noah was previously in a relationship with South African beauty Dani Gabriel but the couple split in 2015. He took her around the world to be by his side on his tour in 2014. It was even rumored in January 2015 that the madly-in-love couple was engaged.

Because of his move to New York to become the new Daily Show host, Noah, unfortunately, had to leave behind his girlfriend at the time. Gabriel has said that she is still proud of him and is happy for his success.

Jordyn Taylor's net worth is not revealed to public knowledge. However, her spouse Trevor Noah's net worth is estimated to be $13 million. He reportedly pockets an annual salary of $4 million. His estimated yearly income is around $352,941. Moreover, Noah owns a mansion in Manhattan, New York City worth $2 million.