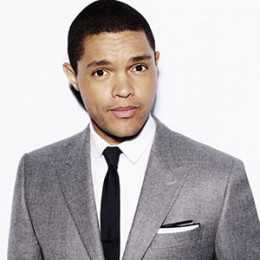 Prominent and one of the most recognizable faces of African world, Trevor Noah is widely known for his great contribution in the field of television and radio host and anchoring. He currently hosts The Daily Show, a late-night television talk show on Comedy Central. His parents' relationship was illegal at the time of his birth under apartheid. Noah dropped his radio show and acting to focus on comedy, and has performed with South African comedians.

Trevor Noah was born on February 20, 1984, in Johannesburg, South Africa. He is a son of Patricia Nombuyiselo Noah and Robert Noah. Noah's childhood was difficult because his parents’ relationship was termed as illegal since interracial marriages were not legalized until the amended Immorality Act of 1985.

Noah was raised by his maternal grandmother, Nomalizo Frances Noah, along with his mother. He went to a private school for his education. His school was a Catholic school in Johannesburg.

Trevor Noah began his career in 2002 with a role in the South African soap opera Isidingo, at the young age of 18. He went on to become one of the top stand-up comedians in his country, touring in the United States and internationally as well.

About to hit the stage in Atlanta. Getting my game face on. @kevinhart4real am I doing it right?

After making appearances on The Tonight Show With Jay Leno and The Late Show With David Letterman, Noah also took on a correspondent role on the popular Daily Show With Jon Stewart. Upon Stewart announcing his departure from the show in 2015, Noah was named as his replacement.

Trevor Noah is not married right now but this does not mean he does not have a girlfriend. He is currently dating his partner, Jordyn Taylor, with whom he spends a lot of time together, and their affair is going really strong. They are in a live-in relationship and they might have future plans to get married soon.

The two started dating in June 2015 after Noah moved to New York. Allegedly, the pair met at one of his comedy gigs. The couple shares a luxury duplex penthouse on the Upper West Side of Manhattan. Taylor is a California native, but she moved to New York to be closer to him.

Taylor is a singer and a model by profession. She appears to be incredibly supportive of Trevor's career. Earlier, she was in a relationship with her former boyfriend Vincent Guiliano, who died in a freak car accident in 2011. His passing inspired multiple songs in both of her musical albums.

Meanwhile, Trevor Noah was previously in a relationship with South African beauty Dani Gabriel but the couple split in 2015. He took her around the world to be by his side on his tour in 2014. It was even rumored in January 2015 that the madly-in-love couple was engaged.

Because of his move to New York to become the new Daily Show host, Noah, unfortunately, had to leave behind his girlfriend at the time. Gabriel has said that she is still proud of him and is happy for his success.

Trevor Noah's net worth is estimated to be $13 million. He pockets an annual salary of $4 million. His estimated yearly income is around $352,941. Moreover, Noah owns a mansion in Manhattan, New York City worth $2 million.