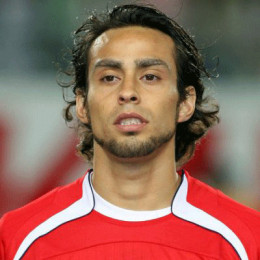 He is a Chilean professional football player who is currently playing in the Brazilian Serie A club Palmeiras and in the Chili National Football Team as an attacking midfielder wearing jersey number 10. He is the captain of the club. He has been in the national team since 2004. He is known for his technical ability in the game. He started his youth career at Colo-Colo and made his professional debut from the same club.

He is a married man. He has been married to his girlfriend for long time. It has been more than a decade that they are married and are living very happily. He loves his wife very much. No information is available on his children. His name has not been associated with any woman so far. He has never been in rumor regarding his personal life but is seen in rumors during the transfer seasons. He was seen in controversy during the Festival of Vińa del Mar gal, which has been the biggest act in his career.

She has been his long time girlfriend. The two are married later. They are living happily. The information on their children is not known.