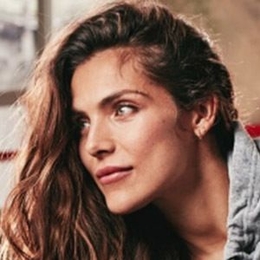 Social media is a strong platform when used properly can help take one career into a new height of sucess. Jorgine Massa Vasstrand never thought she would become a celebrity; however, after starting a fitness blog, she became internet famous. Soon mainstream opportunities began to appear, and she became a household name in Norway.

Jorgine Massa Vasstrand divorced her first husband, Kim Haagensen, in 2014. She has been very vocal about her failed marriage in her blogs and her book " Strong on the Outside, Strong Inside." She revealed that breach of trust by her ex-husband dissolved their marriage.

Vasstrand and her ex-spouse are parents of a daughter Filippa and a son Socrates. They share the joint legal custody of the children. 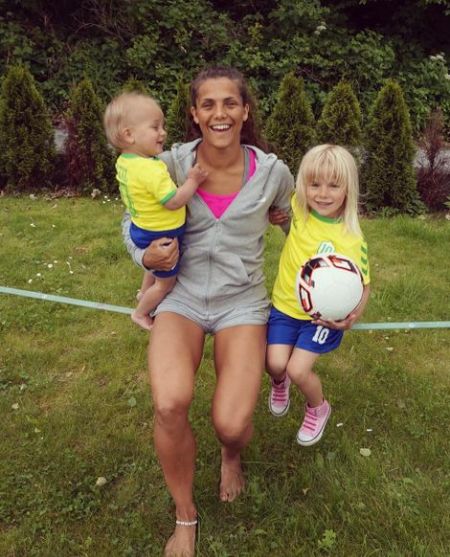 Though the former spouses ended in a bad term, however, because of the kids, the relationship between them is more cordial. Infact, he even featured in some of the episodes of her show "Funkyfam."  Since in the show, she showcases her life and children, so introducing her kids' father seemed natural.

Jorgine Massa Vasstrand, after a tough divorce in 2014, moved to Oslo, where her immediate family is settled. Soon after settling there, she joined the dating app, Tinder, for some casual affairs. However, it turns out fate had something else planned for her. 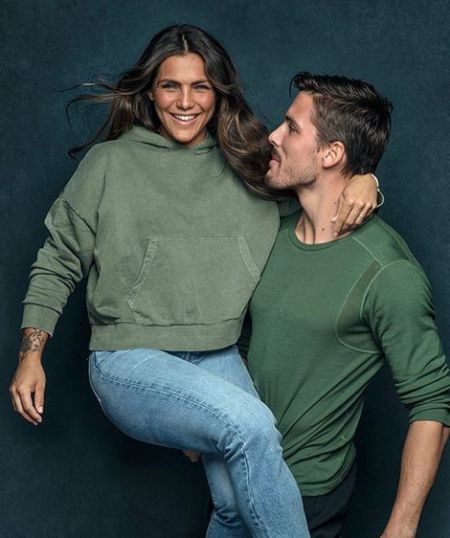 On Tinder, Vasstrand matched up with her future husband Morten Sundli, and together they went on a date. They really liked each other in their first meeting and so they start hanging out regularly. After a while, Jorgine began to realize that romance is blossoming between her and Sundli.

Since Vasstrand was not yet ready for a serious relationship so soon after the divorce, thus she tries her best to sabotage her budding affair with Sundli. Much to her surprise, all her tactics failed miserably and Sundli remained firm in his love for her. Slowly, Morten's true feelings win her over and the pair started dating. 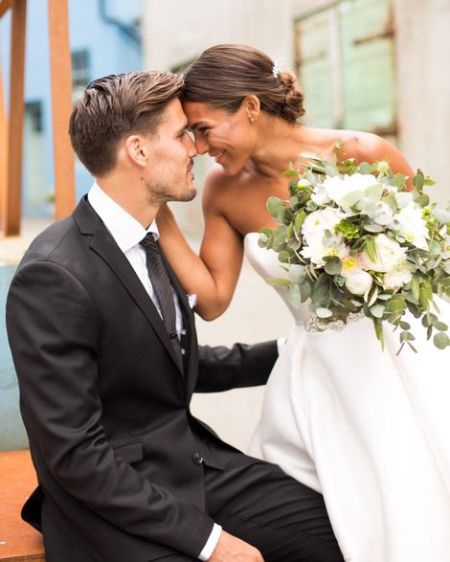 After a year of courtship, on September 2016 the couple got engaged and a year later, on July 2017 the pair exchanged vows. The wedding was a low-key affair that was attended by close friends and family.

Two years have passed since the wedding and the couple is still very much in love. Infact it looks like the admiration for one another has only grown over the years. In an interview, talking about her husband Jorgine stated,

"Morten is just such a sick guy. It's almost as if I don't deserve him"

Similarly, her husband has also many times gushed over his wife. Hoping the love between them remains the same in the coming years as well.

Shares A Son With Morten Sundli

Vasstrand revealed in January 2018 that she was expecting a child with her husband, Morten Sundli. The news did not come as surprise for many fans since she was providing hints on pregnancy from December 2017.

After a few months into the pregnancy, Vasstrand started opening about her struggles. She revealed that she is facing trouble accepting her new body. She further added that after having a flat tummy for so long, she feels ugly after seeing bulge. 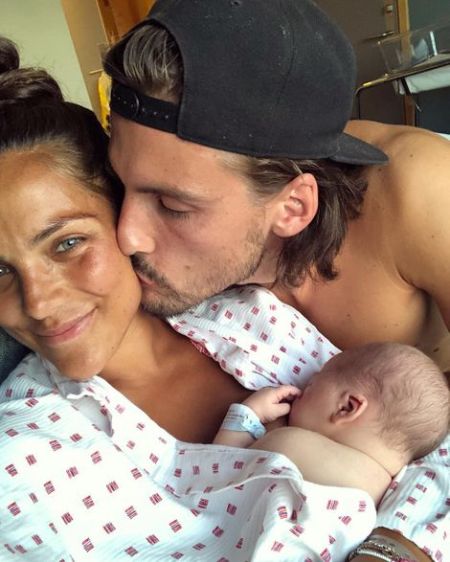 The fitness blogger also commented that she is not looking forward to being pregnant anymore in the future. Nonetheless, she added that she is grateful she is pregnant and happy that Morten and she will be parents.

The pair welcomed the baby Milan Sundli on July 2018 at Ulleval Hospital, Norway. Though the birth happened eight days over the due date, the newborn and mother did not suffer any medical complications.

One of the Biggest Social Media Influencer In Norway

As of 2020, Jorgine boasts a total net worth of $4 million. She earned this fortune from her career as a blogger and TV personality.

Vasstrand who is a fitness trainer by profession started blogging under the name Funkygine from 2014. Because of her honest personality, soon her blog started getting popular and she became one of the biggest bloggers in Norway. It is estimated her blog reaches 16,000 unique users. 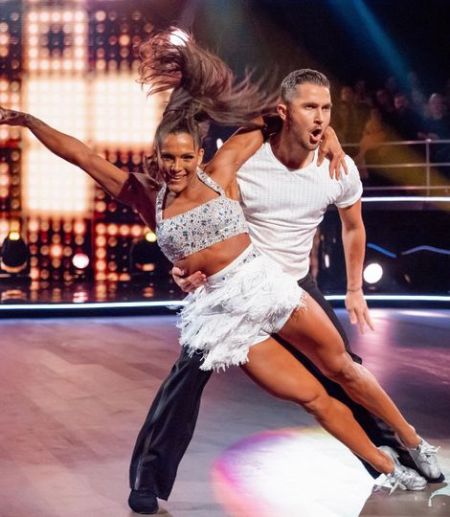 Also, her popularity began to spread in other social media platforms such as Instagram where she shares her fitness pictures and provides a glimpse of her personal life. As of January 2020, her Instagram has over 600000 followers.

After taking the internet by Strom, Vasstrand started making space in mainstream media as well. In 2018, she starred in a series named "Vegard X Funkygine" on VGTV. In the show, she helped Norwegian influencer Vegard Harm to get fit.

After the show sucess, the blue-eyed beauty starred in the TV2 program "Shall We Dance." In the show, she impressed everyone with her amazing dance skills. In 2019, she started in one of the biggest projects of her life.

She became part of the TV series "Funkyfam" which documented the daily life of her. The show was a success and the first episode garnered over 100,000 viewers which was a record for TV 2 channels. 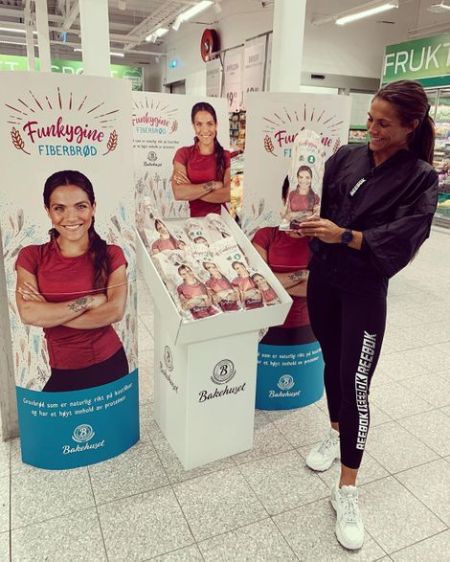 With increasing popularity, Vasstrand has also quickly become a brand favorite. She is the face of many brands including, Reebok, Froosh, and Flux. Also, she is a author of two books. Her first book Strong on the Outside, Strong Inside published in 2018 and her second book Our Best Pasta Dishes in 2019.

Husband Is A Millionaire

Vasstrand's husband Morten Sundli is a football player who plays for Ullensaker / Kisa Idrettslag. As of 2020, his total wealth is estimated to be around $5 million.

The celebrity couple currently lives in a house in Jessheim, Norway. Before moving there, the pair sold their apartment in Oslo for NOK 6 million($659,833). 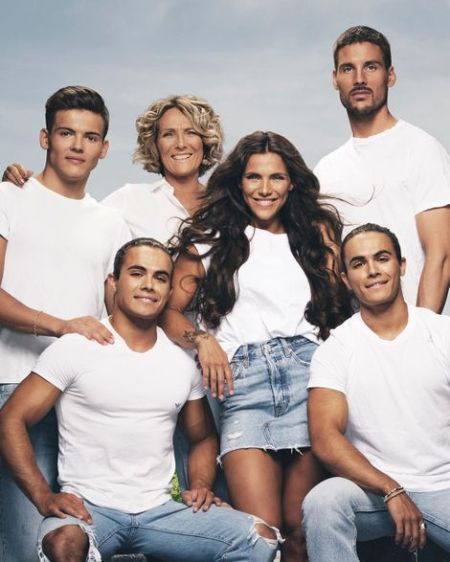 Kim Haagensen is the first husband of Jorgine Massa Vasstrand. They ended in a bitter term. They share two children.

Morten Sundli is a Norwegian footballer. He and Jorgine Massa Vasstrand got married after dating for two years.

Filippa is the daughter of Jorgine Massa Vasstrand and her first husband Kim Haagensen.

Socrates is the son that Jorgine Massa Vasstrand shares with ex-husband Kim Haagensen.