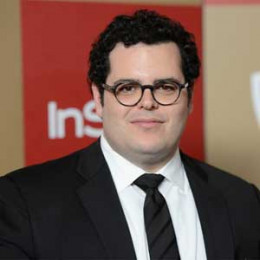 Josh Gad is a widely recognized Tony Award-nominated and Grammy Award-winning singer and actor known for his roles in the movie, The Book of Mormon, 1600 Penn and Jobs. He voiced the character Olaf in the animated feature movie Frozen and also portrayed Le Fou in the feature film Beauty and the Beast.

Josh Gad is currently in a marital relationship with his long-term girlfriend turned wife. After dating for a while, Gad married Ida Darvish on May 10, 2008. For nearly nine years the couple has lived as husband and wife, but their love for each other is still the same. There is no rumor about their divorce nor their extramarital affairs.

Dirty Sexy Money star and his spouse are blessed with two daughters. The couple's first child, daughter Ava Tanya was born on August 3, 2011. Later then, they welcomed daughter Isabella Eve on the 17th of February, 2014.

Currently, Josh and his family is living blissfully without any rumors of separation and extramarital affairs. As of February 2020, the family of four resides in their house located in Los Angeles.

How Much Is Josh Gad's Net worth?

Josh Gad, a well established American actor possesses an estimated net worth of  $12 million dollars. He earns a good sum of money from his acting career. Joshua brings in $3-$5million per annum for appearing in movies and Tv series.

He bagged a huge amount of payroll for starring in Frozen, Pixels, The Wedding Ringer and Beauty and the Beast. The 38-year-old celebrity is currently busy on his project, "1600 Penn".

Josh began his career in 2008, from the movie Twenty-one(21) and later on, he cast as the leading character in the movie The Rocker opposite Christina Applegate. In 2009, he became the regular correspondent of the Television sitcom "The Daily Show ."

Gad debuted as evangelical Elder Cunningham in Broadway musical The Book of Mormon in 2011 which became a major hit of the year. Josh earned multiple awards for his performance in the satire musical such as Tony Awards nomination, Outer Critics Circle Award and a Grammy Award for the best musical theater album. Later, in 2011 Gad worked on ABC's hit show Modern Family, season three alongside Jesse Tyler Ferguson and Eric Stonestreet.

He played numerous movies such as Crossing Over, Mardi gras, Love & other Drugs, Jobs as Steve Wozniak, The Internship, and Frozen as Olaf, The Wedding Ringers, Frozen Forever and more. Gad starred in the 2015 movie, Pixels as Ludlow Lamonsoff aside Jocelyn Hudon.

The 31-year-old actor, Josh was also awarded Annie Award for Voice Acting in Frozen.  He earned a nomination for MTV Movie and TV Award for 2017 movie Beauty and the Best.

Joshua Ilan Gad now famous as Josh Gad was born on February 23, 1981, in Hollywood, Florida, United States. Gad was raised by his stepfather and his mother along with his two brothers and a stepsister. His father is a Jewish immigrant from Afghanistan, and his mother is of Ashkenazi Jewish descent.

In 1999, Josh completed his high school education at Nova Southeastern University. While in high school, in 1998, he won the National Forensics League National Tournament Championship in Humorous Interpretation and Original Oratory.

Later Josh went on to attend Carnegie Mellon College of Fine Arts and graduated in 2003 with a Bachelor of Fine Arts in drama thus polishing his acting skills.

Josh Gad married Ida Darvish on May 10, 2008. The love birds have been together for nearly nine years now. They have two daughters.