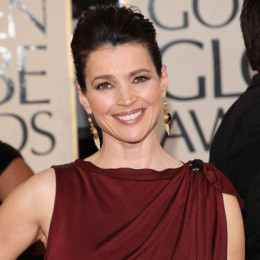 Julia Ormond is a famous English actress who is known best for her performances in the 90s decade. She has won several awards including one Emmy. She has played in several of the movies like Legends of the Fall, First Knight, The Barber of Siberia, etc. She is born to parents John Ormond, a software designer and mother Josephine, a laboratory technician. She went to Guildford High School and Cranleigh School. She had the tomboy personality in her early days.

There is no current information available regarding her relationship. It is supposed that she is single but there have been rumors that she is dating some one secretly. She has been married twice and both of her marriages were unsuccessful. She has a child from her second marriage.

She tied the knot to her first husband Rory Edwards in 1988. The two first met while working in the production of Wuthering Heights.

Later, she married political activist Jon Rubin in 1999 and the two welcomed a daughter Sophie born in 2004.

She loves her child very much and loves to spend time with him. She has been trying to maintain her personal life as private as possible. She was rumored to have a relationship with Brad Pitt as well.

Julia Karin Ormond was born on 4 January 1965 in Epsom, Surrey to Josephine and John Ormond. She is the second in the family of five children.

She studied at Guildford High School and then Cranleigh School.

He is an actor. She had met him in a production of Wuthering Heights. The two got married but ended up in divorce. She has no child from him.

He is a political activist. The two dated for quite a while and got married. They have a child together. The relationship did not go well for too long ending up in divorce.

She is very adorable and now is bit grown up. She loves her mother very much and her mother loves to spend time with her.