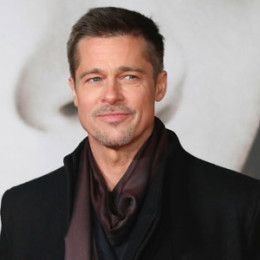 The Sexiest Man Alive, Brad Pitt is one of the biggest movie stars in the world. He is an "Academy Award" and "Golden Globe" winner for his film like "Legend of the Fall", "Fight Club", "The Curious Case of Benjamin Button" and "12 Years a Slave". He also has been cited as the most powerful and influential people in American Entertainment Industry.

Besides all of his professional career, he is also known for being in high profile relationship with many actresses like Jennifer Aniston, Angelina Jolie, Neri Oxman and other. Reportedly, Brad has been spending most of his time with MIT professor Neri.

Brad Pitt was born in 1963, December 18 in Shawnee, Oklahoma as William Bradley Pitt. His father- Bill Pitt owned a truck company and his mother-Jane Pitt was a family counselor. Although he was raised in Southern Baptist, he does not have a good relationship with religion.

Brad attended Kickapoo High School and was a member of the golf, swimming and tennis team. After completing his high school graduation, he enrolled in the University of Missouri, majoring in Journalism with focusing on the advertisement. 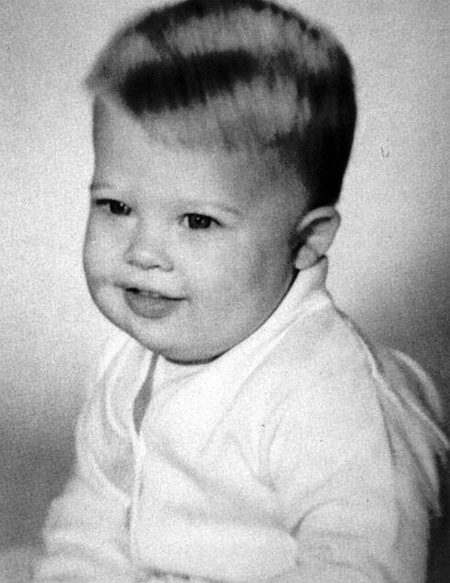 Well, Brad originally aspired to be an advertisement art director when he studied journalism. He dropped out of college and moved to pursue an acting career in Los Angeles. He joined an acting class and soon the agent signed Brad.

After weathering only for seven months in Los Angeles, Brad secured an agent and acting work.

Brad began his acting career in 1987 with minor roles in the movies like "Less than Zero", "No Way Out" and "No Man's Land". He also appeared in the two episodes of- "Another World" broadcast by NBC television network. He made big screen debut in 1989's horror film-"Cutting Class " where he played the character of a teen track star. His performance in the film pushed him into the glare of instant stardom.

In 1991, Brad got universal attention when he got picked up by the two title character in "Thelma and Louise". His combination of sensual playfulness and charming bad boy charisma in a fiery love scene with Geena Davis made him a great sex symbol.

Brad's few films failed to boost in this acting credibility but established his as more than just a pretty face in Hollywood. In 1999, he also appeared in "The Favor" with Elizabeth McGovern, "Johnny Suede" and "CoolWorld" in 1992. 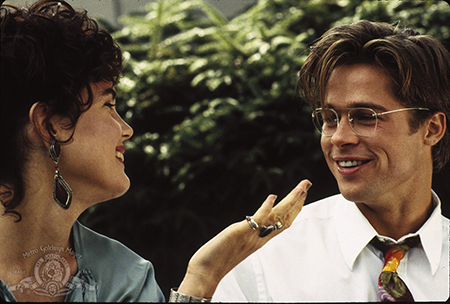 Brad Pitt and Elizabeth McGovern in The Favor
Source: IMDB

Brad gave some of his unimpressive performance in the which resulted in box office failures. He was then bagged as Paul Maclean in Robert Redford's "A River Rus Through It" and finally his performance was appreciated by critics as well as by the audience.

In 1994, Brad was the part of an ensemble cast in the movie "Interview with the Vampire" which consist of the cast Antonio Banderas, Tom Cruise, Christian Slater, and Kirsten Dunst. In the same year, he acted in "Legend of the Fall" as Tristan Ludlow along with Anthony Hopkins, Aidan Quinn, Juliette Binoche, and Henry Thomas.

In the same year, Brad was cast alongside the actors Morgan Freeman and Gwyneth Paltrow in "Seven". The movie hit at the box office with an earning of $327 million. Soon he starred in the 1995 sci-fi movie"12 Monkeys".

For the next few years, Brad appeared in the fairly successful movies like "Sleepers", "Meet Joe Black" and "The Devil's Own". But his performance in the movie "Seven Years in Tebit" as Austrian climber- Heinrich Harrer failed to impress audiences. 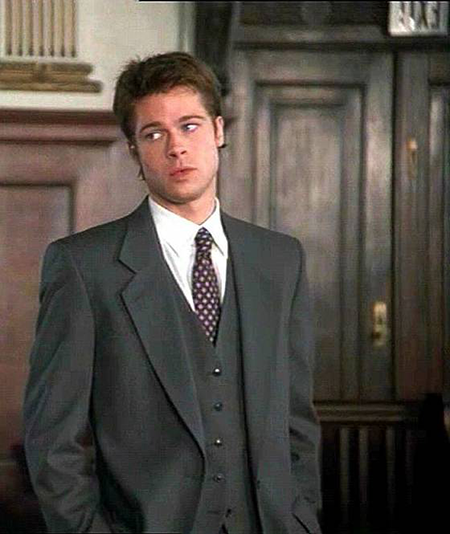 In 1999, Brad was cast in the film "Fight Club" opposite to the famous actors Helena Bonham and Edward Norton. After two years, his romantic comedy with the star Julia Roberts in "The Mexican" became the box-office success with $147.8 million.  And this success leads  Pitt to get another role in "Spy Game". The thriller grossed $143 million.

Then in 2004, Brad starred in the Warner Bros's blockbuster epic "Troy" as the Greek hero Achilles. In the same year, he was also featured in "Ocean's Twelve".

In 2005, Brad started opposite Angelina Jolie in the action flick "Mr. and Mrs. Smith". The movie earned more than $478 million across the world. And the two actors eventually became a real-life couple.

Brad's next film "Babel" critically acclaimed let the actor earn another Golden Globe nomination. In 2007, the actor moved on to less serious fare in the reprisal of his role as Rusty Ryan in movie "Ocean's Thirteen".

Later than, Brad teamed up with Joel and Ethan Coen to star in the FBI comedic thriller "Burn After Reading". The film grossed more than $60 million at the box office and earned two Golden Globe nominations.

Brad took a fantastic lead role in "The Curious Case of Benjamin Button". In the movie, he plays the title character- as a 70-year-old man and ages in reverse. he even received Oscar nod for the film, which won three Academy Awards.

Pitt starred in Inglourious Basterds in 2009, The Tree of Life, Moneyball in 2011. The movie Moneyball earned 6 Oscar nominations and included nods for Brad as both lead actor and producer in the best picture category.

In 2013, Brad won acclaim for his role as Gerry Lane in "World War Z" and later that year he appeared as a supporting character in "The Counselor". His work as a producer and actor in "12 Years a Slave" receive raves and earned his 5th Academy Award nomination, receiving his 2nd nod in the best picture category.

Brad starring as an army sergeant in an action drama "Fury". Then in 2015, he co-starred with wife Jolie in "By the Sea". He then starring in the WWII romantic thriller "Allied" in 2016, with Marion Cotillard, and the satirical "War Machine" in 2017.

In early 2018, it was announced that Brad would co-star with Leonardo DiCaprio in Tarantino's "Once Upon a Time in Hollywood".

One of the biggest movie stars in the world, Brad Pitt has collected a huge sum of money form his acting and producing career. As his net worth is estimated to be $240 million. According to Forbes, in 2016 he was enlisted as the 94th highest-paid entertainer in the world. 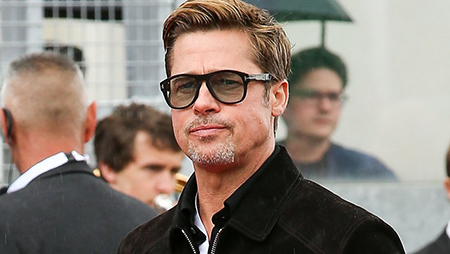 In 2011, Brad and Angelina bought a house in Chateau Miraval which worth $60 million. They sold their Malibu home to for $13.8 million to the Hollywood's favorite gay couple- Ellen DeGeneres and Portia de Rossi.

They also have a New Orleans home which worth $6 million and a seaside villa in Turkey worth $2.7 million.

Well, Brad is also interested in collecting cars as he has a huge collection of car. Here's the list of the car with its price: 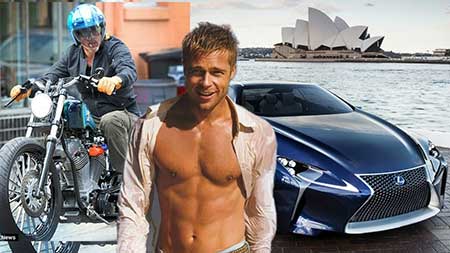 Well, as per the report of 2012, Angelina Jolie bought a $1.6 Million Helicopter for Brad Pitt. A source said to The Sun:

"They've had a helicopter pad installed in the grounds of their south of France home, Chateau Miraval. So Ange thought it would be nice to buy Brad a helicopter as a surprise present. In particular, they would like to be able to fly to and from Cannes." 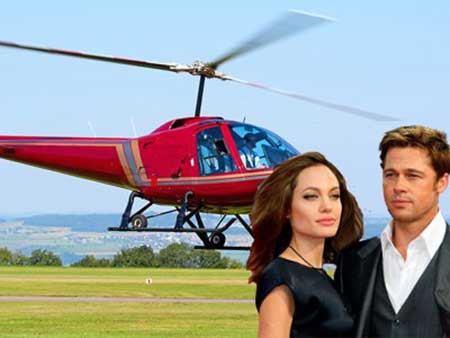 In 2000, July 29, Brad tie the knot with Jennifer Aniston in a private ceremony. They were the favorite couple in the celebrity world until they announced their separation. The reason for their divorce was that Brad cheated Jennifer with Angelina. 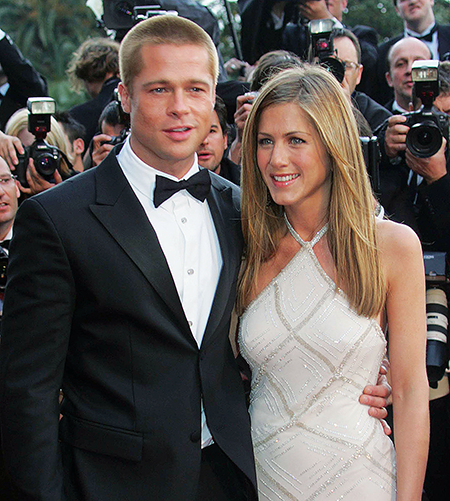 Jennifer and Brad's divorce was finalized in 2005 and in 2006, Angelina confirmed she was pregnant with Brad's first child. After being in a relationship for 7 years, in 2012, Brad and Angelina announced their engagement and married in August 2014. 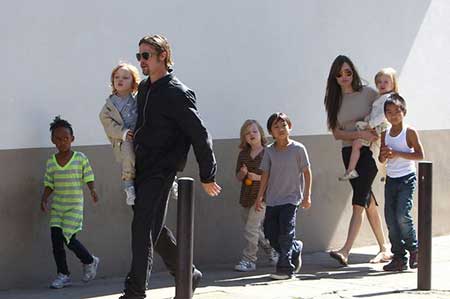 Brad Pitt and Angelina Jolie with their children
Source: Mirror

Angelina and Brad have total 6 children together. As Maddox Chivan, Pax Thien and Zahara Marley, are adopted, Shiloh is their first biological childbirth and after her birth, the couple again gives birth to twins Knox Leon and Vivienne Marcheline.

Angelina and Brad were the quintessential golden couple until they announced their plans regarding divorce in September 2016. 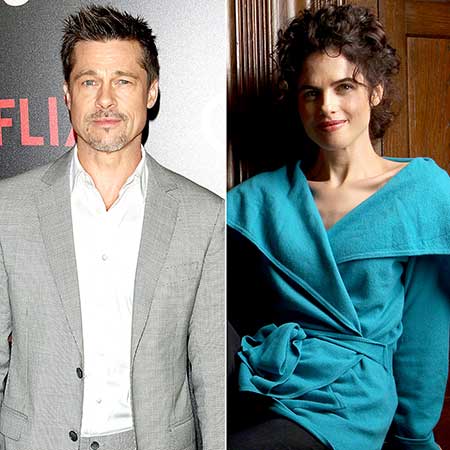 Reportedly, Brad has been dating Neri Oxman for almost six months. It is often said that their friendship has not yet turned into romance but Brad is very much interested in spending much of his time with Neri.

He was rumored to be dating Charlize Theron in 2019. They met in 2018 on a commercial shoot.

"About six months ago, they did a shoot together. They have not been out together recently and were never dating. Reports of them being involved romantically are false."

Neither Pitt nor Theron commented on their relationship rumors.

They tied a knot in a private ceremony on July 29, 2000. They announced their separation amid rumors Brad had cheated on Jennifer with Angelina Jolie

They tied the knot in 2014 at their French chateau. But they shocked the world when they announced their plans to divorce in September 2016.

He is the oldest son of Angelina Jolie and Brad Pitt. And now he is following in the footsteps of his celebrity parents, Brad Pitt and Angelina Jolie.

Pax Thien Jolie-Pitt is the second child of Angelina and Brad. His birth name was Pham Quang Sang.

Zahara Marley Jolie-Pitt is the third child of Brad and Angelina. She was born in Ethiopia as Yemsrach. She is an actress, known for Kung Fu.

Shiloh Nouvel Jolie-Pitt is the fourth and the first biological child of Brad Pitt and Angelina Jolie. She was born in Namibia.

Vivienne Marcheline Jolie-Pitt is Brad Pitt's daughter. She is an actress, known for Maleficent (2014).