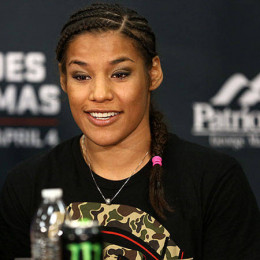 Julianna Pena is an American mixed martial artist who competes in the Ultimate Fighting Championship. She is the first woman to win ‘The Ultimate Fighter’. Pena is the daughter of Grace Pena, a former ‘KREM 2’ reporter and morning/noon meteorologist.

The first woman to win The Ultimate Fighter Julianna Pena was born on August 19, 1989, in the United States of America. She is the younger sister of former KREM 2 reporter and morning/noon meteorologist Grace Pena. She belongs to the Ashkenazi Jewish ethnicity.

Julianna Pena graduated from Mt. Spokane High School in 2007. Then she attended Spokane Community University, but still, has not finished her degree yet.

She started a cardio kickboxing class at the end of October 2008 and took her first Ammy fight in April 2009. She won four consecutive fights, however, suffered her first defeat in April 2012 to “The Ultimate Fighter” Sarah Moras in 140 pounds catchweight bout.

Julianna Pena is one of the fighters selected to be on “The Ultimate Fighter: Team Rousey vs. Team Tate in August 2013.

During Julianna Pena's first tournament fight was very tuff and as she faced top 10 ranked Shayna Baszler. Ronda Rousey selected the first match between Pena and Baszler. After a back and first round in which Julianna's actual boxing combinations escaped lots of Baszler’s submission attempts.

She came out hard in the 2nd round, with powerful knee strikes that amazed Baszler. In the end, she was able to achieve back mount and won by rear naked choke for possibly the biggest upset victory of the season.

Julianna Pena faced Jessica Rakoczy in the finals on 30 November 2013 at The Ultimate Fighter 18 Finale. In the final, she won the bout by TKO.

Although, the severity of the injury, doctors have guaranteed that Pena’s right knee will be fully recovered after surgery.

Julianna Pena was arrested in Spokane, Washington, on Sunday, December 20, 2015. Spokane Police Department charged with 2 counts of Assault. She got drunk in a bar with Josh Gow, and Pena kicked a bar employee in the groin and also the owner for 2 times.

After the court hearing in December, Julianna was further moved in the Spokane County District Court 19th of January. Later, a judge granted a stipulation order of extension in her case such that if Julianna had no other incidents for a year so that the case would be dismissed.

Julianna Pena is a popular and successful martial art. However, she is still unmarried and there are no rumors about her boyfriend and love affairs till now.