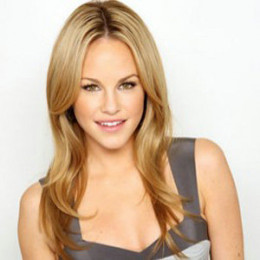 An American actress, Julie Berman is currently married to Michael Grady since 2008. She is known for her role as Lulu Spencer on the ABC Daytime soap opera "General Hospital". Julie Berman was born to father Peter and mother Renée Berman. She graduated from the "Marymount High School" in Los Angeles in 2002. She began her acting career at the age of six, appearing in various commercials ads.

Berman is happily married to her husband Michael Grady on 15 August 2008.

She gave birth to a son on Monday 18th February 2019. She announced the news via her social media with a video timeline that started with an image of her husband popping a champagne bottle cork on 9th May 2018 celebrating her pregnancy news.

Some days later she shared the first image of her baby boy via an Instagram post on 26th February celebrating his first week birthday.

Julie Berman was born on 3 November 1983 in Los Angeles, California.

Berman made her television debut with the recurring role in the WB family drama series "7th Heaven". Julie Berman won 2 Daytime Emmy Awards for Outstanding Younger Actress in 2009 and 2010.