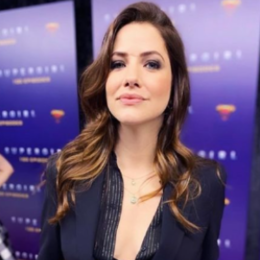 Julie Gonzalo is an Argentine-American actress best known for her roles in A Cinderella Story, Freaky Friday, and Dodgeball. She has been in the entertainment field for the past two decades. Gonzalo's latest project includes a Hallmark television film, Cut, Color, Murder as Ali.

Is Julie Gonzalo Married to Chris McNally? What's Her Relationship With Him?

Julie Gonzalo is indeed in a relationship with Chris McNally. However, the duo is yet to be married. Although there are rumors that she is married to McNally, it is false as the duo have never exchanged wedding vows and are in a live-in relationship.

The lady's partner Christopher is a Canadian-born actor most notable for his work in the Hallmark Channel movie and TV series When Calls the Heart. 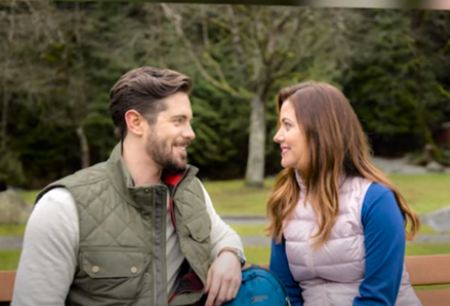 Julie first met her beau Chris McNally in 2017 on the set of the Hallmark Channel movie, The Sweetest Heart. Gonzalo found Christopher an outstanding and terrific actor, so it was easy working with him. Neither celebrity has announced no news of marriage, but the day does not look too far.

The actress went head over heels after learning McNally was the one. They immediately started dating after knowing each other for a few months. And before expanding a family, Gonzalo adopted two dogs, Charlie and Bowie, to develop their co-parenting relationship.

Julie Gonzalo And Chris McNally Share a Baby Together

The Freaky Friday actress keeps her personal life away from the media. She does not publicize her day-to-day life, but on June 5, 2022, Gonzalo revealed the happy news of her and her baby via Instagram.

Through her post, she revealed that she and Chris had welcomed their first child, but the kid's name and gender are still under wraps. 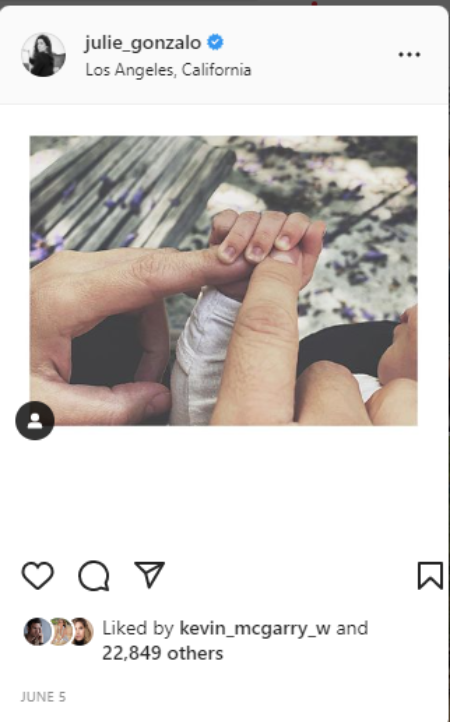 In June 2022, the ultra-private hallmark duo secretly welcomed a baby girl. Gonzalo shared a photo of their newborn grabbing both parents' fingertips on June 5, writing "Welcome Baby M" with a heart emoji.

Julie Gonzalo has an estimated net worth of $5 million as of 2022. She receives a colossal amount from her successful career as an actress and model. The blue-eyed actress earns more than a million bucks in a year. 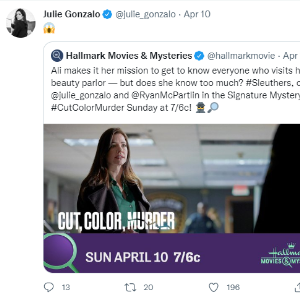 Like Gonzalo, her husband Christopher McNally is a versatile Canadian actor. He has appeared in numerous hit shows such as When Calls the Heart, Freefall, Supernatural, and Falling Skies. In mid-2019, Chris landed the role of Cal Dennison in the Lifetime Network TV movie Heaven.

Gonzalo started her professional career as a print model in elite magazines. Julie later decided to pursue a career in acting. She auditioned for multiple movies and hallmark TV series.

Check out the clip of Julie Gonzalo's Hallmark movie The Sweetest Heart!

Julie Gonzalo made a feature big-screen debut, landing the role of Eve in the 2002 movie I'm with Lucy opposite Monica Potter. In the same year, she also made her tv debut as Kim Modica on the WB sitcom Greetings from Tucson.

Gonzalo has played in films and shows such as Christmas with the Kranks, Freaky Friday, Falling for Vermont, Dodgeball: A True Underdog Story, and Cut Color Murder.

Besides the beauty, Julie Gonzalo's eyebrow has been the other most curious part of her body. The actress has a visible facial scar on the bridge of her nose.

According to some genuine online sources, Gonzalo had an accident in childhood that left a visible scar above her nose. Nevertheless, the spot has not impacted Julie's criticism.

Julie Gonzalo is critically acclaimed for her character as Andrea Rojas (Arcata) in the action, adventure, and drama series "Supergirl." The CBS original show ran for six seasons and has 126 episodes, but the 41-year-old appeared only in seasons five and six.

Julie Gonzalo was born on September 9, 1981 in lanus Buenos Aires. She grew up in General San Martin Partido. Julie moved to Miami Beach, Florida, at eight with her brother and family.

Gonzalo is of Hispanic ethnic background and holds Argentine citizenship. The starlet had a keen interest in acting. Thus, she took theatre classes after she switched to Florida.

Julie Gonzalo likes to share her daily life update with her fans and followers. Apart from the entertainment industries, McNally's wife is famous on networking sites.

Gonzalo is available on the social networking site Instagram with 117k followers. Gonzalo makes $357 - $595 per ad post. The Buenos Aires native has earned massive fan followers of 68.2k on Twitter. She joined Twitter in April 2011.

Gonzalo has an appealing body structure with a height of 5 feet 5 inches and weighs around 55 kg. Her slim hourglass-shaped body is measured at 34-25-35 inches. Julie herself is a determined, passionate, and independent woman.

Julie, who does not like applying heavy makeup on her face, has not yet undergone any cosmetic surgery. She is blessed with clear glass-like skin and a well-maintained figure.

Gonzalo has a pair of ocean-blue eyes and long brown hair. The Supergirl alum is a nonvegetarian. She maintains her figure through gym and yoga and takes a healthy balanced diet. Julie is super conscious regarding her health; she prepares her meals.

Chris McNally and Julie Gonzalo are happily married for over a decade. They met in 2018 on the set of a tv show. Today, the pair share one daughter together.

Julie Gonzalo gave birth to a baby girl whose name starts with M in June 2022. She is the first child to the star couple.