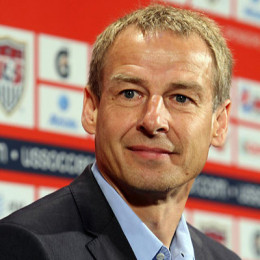 Jurgen Klinsmann, former German footballer and now the head coach of the United States National Team, was born to master baker Siegried Klinsmann and his wife Martha. He was raised among four brothers. His family owns a bakery in Stuttgart, Botnang district. Before Jurgen Klinsmann entered professional football, he finished his apprenticeship as a baker under his father in the year 1982. Jurgen is in the list of "125 Greatest Living Footballers" published in the FIFA 100 in the year 2004. He was the manager of German National team, head coach of Bayern Munich club and has led United States to the last 16 of the FIFA World Cup held in Brazil.

Besides being a baker, Jurgen also is a certified helicopter pilot and he is fluent in 4 different languages - German, French, Italian and English. Jurgen is also known for his charity works.

Along with some of his close friend, Jurgen has founded a children's charity foundation called "Agapedia" which is Greek for "Love for children".

His net worth is estimated to be $16 million.

When he was 8, he started playing for TB Gingen, an amateur football club.

He is also a board member of "Fur die Zukunft lernen" - a German initiative which translates to "Learning for the future", it supports the education of the younger generation about the holocaust. Klinsmann donated more than $1 million dollar - the proceeds of his farewell game to different children charity organizations.