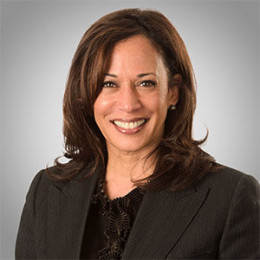 American attorney and politician, Kamala Harris is best known as the junior United States Senator from California. She is the daughter of Dr. Shyamala Gopalan Harris, a breast cancer specialist and Donald Harris, a Stanford University economics professor. Harris attended Howard University in Washington, D.C. She is a member of the Democratic Party and also served as the 32nd Attorney General of California.

On 7th April 2014, Harris announced that she got engaged to Douglas Emhoff, a lawyer. The couple married on 22nd August 2014, in Santa Barbara, California. Her husband is a Jew.

Her husband once was a partner at Venable LLP in Los Angeles.

Though the two don't share any kids between them, she has two stepchildren, Cole, 24, and Ella, 19, from Douglas's previous marriage. He was married to Kerstin Emhoff.

Her two kids call her 'Momala.' Their relationship is one of the best around as despite being a step-mother, Kamala has always looked at them as her own.

In an interview, she recalled how she had butterflies in her stomach when she met her future husband's children and was a nervous wreck.

Kamala Harris previously dated Willie Brown, speaker of the California State Assembly. They broke up shortly after he was elected as the Mayor of San Francisco. It was because of their relationship that Brown, who is 30-year older than Harris, separated from his wife. But because of some misunderstanding, Harris called off their relationship.

In November 2016, Mother Jones magazine named Kamala as one of "11 Democrats Who Could Defeat President Trump in 2020."

Kamala Harris was born Kamala Devi Harris on October 20, 1964, in  Oakland, California. Her mother, Shyamala Gopalan Harris was a Tamil Indian (1938–2009), and father, Donald Harris is a Jamaican. She is American and belongs to the mixed ethnicity.

Her first name, Kamala is taken from the Sanskrit which means lotus flower. She has a younger sister, Maya Harris who is a lawyer and public policy advocate. Her parents got divorced when she was just 7 and afterward, she and her younger sister started to live with their mother in Canada.

Harris, 54, completed her graduation from the Montreal's Westmount High School in Quebec. Later, she attended Howard University in Washington, D.C., and majored in political science and economics.

Thinking of my mother today. She was smart, fierce, and my first campaign staffer — and I dearly wish she was here with us for this moment. Her spirit still drives me to fight for our values.

During her college days, she was elected to the liberal arts student council as a freshman class representative, a member of the debate team, and she joined the Alpha Chapter of Alpha Kappa Alpha sorority.

In 1989, she went to California in order to gain her Juris Doctor (J.D.) from the University of California, Hastings College of the Law, in 1989.

Kamala Harris began her career in the 1990s as a deputy district attorney in Alameda County, California where she served for 8 years. She has raised her voice against many crimes and civil rights.

Since 2017, she served as the junior United States Senator for California.

She officially announced her campaign to run for the President of the United States in the 2020 United States presidential election on 21 January 2019.

The former attorney general, the daughter of immigrants from India and Jamaica launched her campaign for the White House. She said,

"Let’s do this, together. Let’s claim our future. For ourselves, for our children, and for our country."

"They’re the values we as Americans cherish, and they’re all on the line now. The future of our country depends on you and millions of others lifting our voices to fight for our American values."

Sources reported that she will launch her campaign on Sunday during a rally in Oakland, California.

The big announcement of Harris was followed by the entrance of her fellow senators  Kirsten Gillibrand of New York, Elizabeth Warren of Massachusetts, along with Hawaii Congresswoman Tulsi Gabbard and former housing secretary Julian Castro.

If she secured the nomination that would make her the first African-American or Indian-American woman nominee for the presidency. Sadly, after months of campaigning, it all came to an end due to a lack of proper funding. Her lackluster campaign and tumbling poll numbers crumbled her candidacy and she called it off.

The news came after she had some controversy with her own staff. While ending her campaign, she wrote, “My campaign for president simply doesn’t have the financial resources we need to continue. But I want to be clear with you: I am still very much in this fight.”

On 7th April 2014, she has announced that she has engaged to be married with Douglas Emhoff, a lawyer. They married on 22nd August 2014.