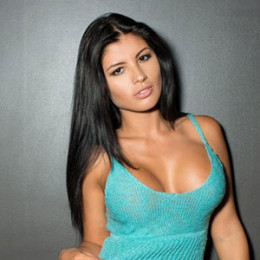 American model, Karen Vi is the first runner-up of Miss San Antonio American Beauty pageant. Unlike several models, she never had plans to pursue a career in modeling until she was offered to participate in Miss Texas USA. She later appeared in several commercials and advertisements

Karen Vi is an unmarried woman. Yet, she is in an intimate relationship with a mysterious man. Prior to meeting him, Vi was not spotted with anyone and even has not introduced anyone as her boyfriend.

But, she has a child, a baby boy named Grayson. Vi has not yet revealed the name of her baby's father. The new mother posts several pre and post-pregnancy pictures on her social media.

Meanwhile, she mentioned in her Instagram profile "Honest Mamahood". It's pretty clear that she is a proud mother though her personal life and affair are in shade.

Being a mother for the very first time, she shared her experience via a post that said,

'As mamas, especially first timers, we all have fears on what labor will be like. Before having Grayson, the scariest thing for me to imagine was that I wouldn’t be able to handle the pain of having him naturally, that my baby would get stuck, or that I would bleed out profusely after labor. I learned that conquering your fears is not only about knowledge and being informed, but about facing those fears head on. Instead of just being afraid, picture what would happen if those fears turned into reality."

"What will you do? What will your plan be? Once you learn to accept that the pendulum can swing either way no matter how hard you prepare, you learn to be accepting of what can happen, and they don’t seem so scary anymore. I did a lot of mental preparation throughout my pregnancy for labor, and I will say that it worked 110%. Your mind is more powerful than you thank! What fears did you have before labor and how did you handle them?"

Have a look at her post with her child:

It pretty clear that she has a close bonding with her first baby.

The greatest gift Merry Christmas to you and your beloved families from Mr. Gray and I

Moreover, Karen scolded Le'Veon Bell for sending her a DM on her Instagram account. Bell is the famous American football stand out running back playing for the Pittsburgh Steelers of the National Football League (NFL).

"I will never understand why dudes or athletes, especially those with gfs even TRY. Truly makes me sick."

'Didn't he just have a baby with a beautiful girl?! Bye Felipe.'

According to some sources, Bell sent her DM, ''Hello gorgeous'' but in an indirect reply, Vi accused him of trying to approach her not minding he has a ''beautiful girlfriend, Mia Khalifa.'' Besides, Vi is a fitness freak and posts several videos and pictures of her exercising.

Prior to the scandal, Karen was linked to singer, IceJJFish aka Daniel McLoyd. She's starred in some music videos created by him. On January 4, 2020, Icejjfish took a group snap on his Instagram with Karen and Halfpricerickyp, and tank thanking them for the help that changed his life.

Karen Vi worked as a fitness model for years from which she collects a good net worth and salary. As of January 2020, her net worth is still under review, but, she surely might have an accumulated net worth of $1million.

Needless to say, the San Antonio born model pockets huge amount from ads, endorsements and commercials as well. She earns $2,618.25 - $4,363.75 per ad post for amassing over 878k followers on Instagram.

Karen Vi was born on 3rd October 1989 in San Antonio, Texas under the birth sign Libra. Vi is American as per nationality and as far as her ethnicity is concerned, she is Mixed (Mexican and Spanish descent).

Unlike several models, Vi did not have any plans to start a career in modeling. When she was 19, she received an offer to participate in the Miss Texas USA Pageant. The model then participated in Miss San Antonio American Beauty pageant and finished as a first runner-up.

I’ve got something in the works... Meet @shop_glow_ My stomach is in knots right now because I’m nervous as hell and excited at the same time! I have no idea where this adventure will take me, but I invite you to ride shotgun through it all.. because after all, you all are the inspiration behind the creation of “Glow.” Thank you all for riding with me!

Later, Vi won the Conexion's, Hottest Latina. She then started working as a professional model and did shoot with many popular photographers. Furthermore, she appeared in several commercials and TV advertisements. Moreover, Karen also worked for alcohol & beer brands and is active as a ring card girl.

Karen Vi gave birth to her first child, a son Grayson in 2018. Vi posts several pictures of her on her social media