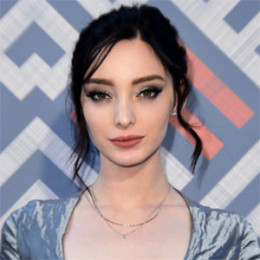 Emma Dumont is an American dancer, model, and actress. She is well known for her appearance in the ABC Family series Bunheads, as Melanie Segal. She is also noted for her roles on the NBC series, Aquarius, as Emma Karn. She is currently playing the lead role on the FOX series The Gifted. She portrayed Polaris in the series.

Emma Dumont was born Emma Noelle Roberts on 15 November 1994, in Seattle, Washington. She is White in ethnicity and holds American nationality.

Dumont joined Washington Middle School and later went to James A. Garfield High School. She was homeschooled as a child. She worked hard to achieve her acting and modeling goals. She studied at Orange County High School of Arts in the Theater Conservatory and Music, located in Santa Ana, California.

Emma Dumont started acting in community theater at an early age of six. She performed in Seattle Music Theater and Seattle Public Theater. She is also known for her violin skills; she has been playing violin from the age of four.

Moreover, Dumont is also a member Mensa with plans to forward her education in mechanical engineering.

Emma Dumont made her debut from True Adolescents in 2007. She was cast alongside Mark Duplass and Melissa Leo. Later, she made her appearance in the movie, Dear Lemon Lima.

In 2010, Dumont won the V magazine V A Model search contest. She made her appearance in the 2010 March issue and achieved a contract from Ford models. She also walked in New York Fashion Walk the same year and did fashion week shows in Los Angeles, Hongkong, Tokyo, and China.

The following year, Dumont was featured as a lead character in NBC pilot METRO. She was cast alongside Jimmy Smits and Noah Emmerich. In 2012, Dumont starred as Melanie Segal in the ABC Family original series, Bunheads, alongside Kelly Bishop and Sutton Foster.

In 2012, Dumont made her appearance in the movie Nobody Walks, alongside John Krasinski, Olivia Thirlby, Dylan McDermott, Jane Levy, and Rosemarie DeWitt.

By the end of 2013, Dumont became an FRC team mentor. In 2014, she filmed two TV pilots for NBC which continued for two seasons only. In 2017, Dumont featured in Fox's pilot of X-Men TV series, The Gifted.

Happy birthday to the one and only @blairredford. I always turn to you if I need a wall smashed or a good protein bar recommendation. Have the best day ever man! Mwahh!

Dumont is very intelligent and also a member of the high-IQ society Mensa. She is interested in engineering as well. She took part in her first robotics program as a teenager.

She was rumored to be dating her co-star Lukas Cage.

Emma Dumont stands at a height of 1.7 meters (5 feet 9 inches). She earns a considerable amount of money from her career as an actress, musician, and model.

She has made her appearance in various movies and television series in her career and has worked with various luxury brands.

Dumont also made a lot of money from her appearance on Pretty Little Liars. As per some online sources, cast members in the series made up to $50,000 per episode.

A female model in America makes a salary of $41,300 on average per year. So, we can assume that Dumont also earns an amount close to that. Some online sources reported her net worth to be $500,000.