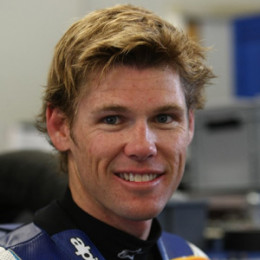 Karl Muggeridge is one of the famous Australian Road Racer who is the winner of Supersport World Championship 2004 and has raced in the Superbike World Championship, primarily on Honda. Also, he had a guest ride with the Castrol Honda Team in the World Superbike Championship. Currently, he is married to Isobel and together they are parents of two children.

Karl Muggeridge was born on 20th April 1974 and was raised by his parents in Tweed Heads, New South Wales, Australia. He belongs to a Caucasian race. From childhood, he was passionate about riding a bike and wanted to pursue a career in the field.

He served several years of Motocross and began circuit racing during 1994 where he finished 4th in his homeland’s 250cc series a year later on Suzuki. For next three years, he did an assortment of races around the world primarily on 600cc Supersport bikes.

After Kate expanded his Superbike World Championship team to 2 Honda Fireblade bikes 2005, Muggeridge moved forward to join Chris Vermeulen and won the WSS title for Kate in 2003 and challenged for the WSBK crown as a series rookie in 2004.

Unfortunately, in 2006, he had a back injury which caused him to miss the Valencia round and failed to score a podium finish despite strong qualifying runs including 3rd at Brands Hatch. Finally, he finished the season 12th with 123 points.

In 2007, he lost the ride and was offered a Supersport World Champion ride by the team and remained in WSBK and on Honda by joining countryman Josh Brookes at Alto Evolution. He lost his home race at Phillip Island because of a crash during practice. He along with his team also missed Misano due to legal problems, and also Brookes left the team.

He teamed with DFXtreme of Hondas in 2008 and Celani Suzuki team in 2009. Through the season, he also raced a couple of rounds in the British Superbike Championship for the HM Plant, Honda as a replacement rider for the injured Glen Richard.

Furthermore, he moved to IDM Superbike Championship where he rode the Holzhauer Racing Promotion Honda and won the opening round at the Lausitzring collecting a pole position and a double race. Currently, he is leading the series by 29 points with one round to go. Also, he had a guest ride with the Castrol Honda Team in the World Superbike Championship during the last round at Portimao.

Karl married his wife, Isobel, on 8th April 2005, in Gold Coast. The husband and wife are blessed with two sons.

Besides a successful bike rider, he is a responsible father who equally manages time for both his career and family. He often visits different places for vacation. He actively participates in the social media and has shared numbers of photos of his enjoyable moments there.

Karl won the 2004 World Supersport Champion and competed in many competition representing Honda. He must have earned a decent amount from those races. His success reflects that he must have a net worth not less than in seven figures.

Karl Muggeridge is happily married to Isabelle. The husband and wife are proud parents of two sons Ryan and Oliver.

Ryan Lucas is the first son of Karl Muggeridge and Isabelle.

Oliver is the youngest son of the couple.