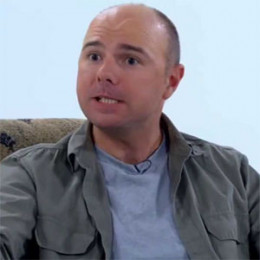 Karl Pilkington, a British television presenter, radio personality, actor and a comedian rose to fame after appearing in the show, The Ricky Gervais Show. Pilkinton made his acting debut in 2012 from the Netflix series named, Derek.

Born on 23rd September 1972 in Manchester England. As far as his ethnicity, he belongs to Caucasian and is a British.

Pilkington attended Ashton-on-Mersey-School but used to secure very low marks which shows that he is not much interested in studies.

Pilkington started his career after shifting to London and joined XFM, a commercial radio station as a producer. In December 2005, he worked in BBC 6 Music shows for Nemone which was co-presented along with Russell Brand.

After that, Pilkington was seen in the show, The Ricky Gervais Show. The shoe gave him more popularity and eventually rose to fame. Moreover, he also appeared on Richard Bacon’s Radio 5 Live, an afternoon show from which he was again successful to gran much of the attention. He then appeared as a guest on many shows as well including The Cultural Show, Flipside TV and so on.

Later on, Pilkington was seen in the Politics, an interview with Ricky Gervais live to stand up comedy’s DVD. Apart from all these, on 12th April 2012, he made his debut in acting from the Channel 4’s comedy-drama named, Derek with the role of a bus driver and caretaker along with the casts Ricky Gervais, Kerry Godliman, David Earl, Brett Goldstein, Tom Barlow, and others.

Unfortunately, he left the show after the first episode of Derek second series. Moving on, he starred in The Moaning of Life a five-part Sky1 documentary in 2013 and as of 2017, he is all set to write the new sitcom of Sky1 called, Sick of it and also working for the show, Idiot Abroad.

Both of the pairs is really supportive to each other as they not only made their relationship strong but made their career strong as well. From the date of their linked up to till now, there is no such buzz about their separation as well as marriage. So, as of now, they might be dating and not yet married.

Karl Pilkington's Net Worth and Salary

Apart from his wealth and income, he is also included in charity works. He was signed and designed for his own card for the Thomas Coram Foundation for Children, a UK charity which was launched by Stampin’ Up!The UK, a crafting company.