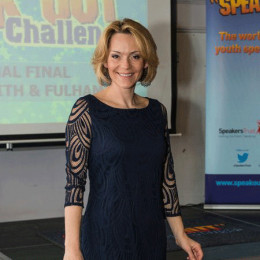 A British journalist and television news presenter Kasia Madera who is well known as a presenter of the evening and overnight bulletins on the BBC News. She is born to Polish parents. She completed her graduation from Queen Mary & Westfield, University of London and earned degree in French and politics. She also holds journalism postgraduate diploma from City University London. She joined BBC as graduate program in 2002. Her first job was to present BBC Three's youth oriented news bulletin 60 Seconds. Currently, she is co-presenter at overnight presenting slot on the BBC News Channel.

Talking about her marital status, she is already married. Though she is married she has not revealed the name of her husband. Recently, she gave birth to a baby boy in 2011. She is very popular among her fans due to her sexy figure and magical voice.

She has got many followers in her twitter account @KasiaMadera where she shares her thoughts and latest news.

Katarzyna "Kasia" Madera was born on 4 October 1975 in London, England to Polish parents.

She works on BBC News and BBC World News similar to Philippa Thomas.  She became one of the main relief presenters of World News Today in 2013.

He is the only child of her. His picture can be found in her official twitter page.