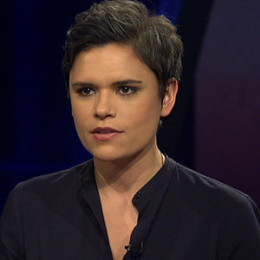 Kate Fagan is openly gay and is in a relationship with, Kathryn Budig. She currently hosts a podcast Free Cookie with her girlfriend on ESPN.

Kate Fagan born as Katheleen Elizabeth Fagan on November 15, 1981, in Warwick, Rhode Island to Chris, a former pro basketball player in Europe who later opened a financial investment company and Kathy, a sales representative for McGraw-Hill.

She studied at Niskayuna High School in Schenectady, New York. There she played basket ball and became the all-time scorer in the school. Fagan then joined the University of Colorado Boulder and got a letter in basketball. As a freshman, she suffered a foot injury and later made a comeback becoming the team's best scorers and shooters. During the 2002-03 season, Kate set a Big 12 Conference record, making 44 consecutive free throws. She was a perennial First team Academic Big 12 performer.

Fagan passed out from the university with a Bachelor of Science degree in Communication in 2004. She even played for Colorado Chill in National Women's Basketball League(NWBL) for two seasons.

Kate started her career in 2006, as a sports editor for Ellensburg Daily Record and in 2007, she joined the Glens Falls Post-star as a sportswriter. From 2008-2011, she served as Philadelphia Inquirer as a beat writer for Philadelphia 76ers.

Also, she wrote for ESPN since 2012, often making appearances on First Take and Around the Horn. Fagan is the co-host of Jane and Kate with Sarah Spain and Jane McManus, The Trifecta with Spain, Will and Kate with Will Cain on ESPN Radio.

Besides, she is also an author of The Reappearing Act: Coming Out as Gay on a College Basketball Team Led by Born-Again Christians, released in 2014. In the book, she shared her experiences figuring out her sexual orientation while playing for Colorado women's basketball. Her second book What Made Maddy Run, about a University of Pennsylvania track and field athlete, Madison Holleran's suicide in 2014, is due to release in late 2017.

Currently, she is the host of Free Cookie, her own podcast on ESPN with her girlfriend/partner Kathryn Budig. The first episode of the show aired in May 2017.

Kate faced a lot of difficulties to identify herself as gay. While in college she always had a thing for girls but she could never figure out what that feeling meant. Kate found her identity in college after she met a woman who identified as gay.

Kate said,"It wasn’t until I got to college and I met a woman who identified as gay, and I could no longer convince myself that all women felt that way when they met new, interesting people.”

She is now in a relationship with Kathryn Budig since mid-2016. Her girlfriend is a yogi, a certified skydiver, and author. The couple one of the most adorable lesbian couple in the television industry.

Having worked as a sports journalist for severals years, Kate has maintained an estimated net worth of $1.4 million.