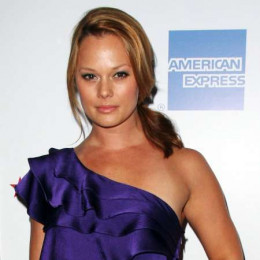 An American actress and dancer who is better known for playing as Kim Kaswell on the Lifetime channel's Drop Dead Diva. She attended El Camino Fundamental High School where she was part of school musicals and dance classes. After graduating she moved to New York to pursue her career on Broadway. In 2001 she got her first role on Broadway as Peggy Sawyer in the revival of 42nd Street. In television screen, she has already made guest appearance in popular series like Witchblade, Coldcase, Home Improvement, Law & Order: Special Victims Unit. She was awarded with the Fred Astaire Award for Best Female Dancer for her awesome dancing in 42nd Street.

Regarding her personal life she is already tied in knot. Her husband is a businessman. Their marriage was performed in The Beverly Hills Hotel in the presence of their family and friends. Together they make very cute couple. Till now no dispute has arise in their relationship which suggest that they are leading very happy married life. The couple is already blessed with a beautiful baby boy.

Professionally he is a businessman. Couple's picture can be found in different sites. He is a father of a son.

He is the only child of the family. He is a very healthy kid.