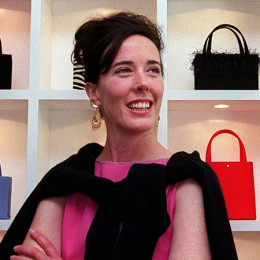 Kate Spade was a professional American fashion designer and businesswoman. She was best known as the founder of the designer brand Kate Spade New York which has millions of customers all over the world.

Kate Spade was married Andy Spade in 1994 at an intimate yet lavishing ceremony. The duo first met at the Arizona State University and started dating. They shared a daughter, Frances Beatrix Spade, born in 2005.

Spade committed suicide by hanging at her Manhattan apartment on June 5, 2018. Later, police reported she left a note addressed to her daughter. The day after his wife's death, Andy revealed, Kate was suffered from depression and anxiety. He also mentioned, she gets treatment for a long time but they weren't warned, she could do something like this.

Kate Spade was born on December 24, 1962, in Kansas City, Missouri, the daughter of June (Mullen) and Earl Francis Brosnahan. She graduated from  St. Teresa's Academy and later joined the University of Kansas.

She is an American fashion designer best known as the CEO of Kate Spade & Co, which is a lifestyle accessory and fashion brand. She has majored in journalism from Arizona State University. In 1996, for her classic designs, she was awarded "America's New Fashion Talent in Accessories" by the Council of Fashion Designers of America. And again in 1998, she was honored by CFDA with "Best Accessory Designer of the Year".

Andrew "Andy" Spade is the co-founder of Partners & Spade, along with Anthony Sperduti who was named one of 100 creative business people of 2009 by Fast Company.

She was born safe and healthy. She is as beautiful as her mother.