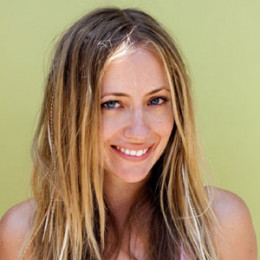 Kathryn Budig is a renown yoga teacher whose work is praised not only at national level but has gained fame internationally. She is openly gay and is dating her partner Kate Fagan.

Kathryn Budig was born in Lawrence, Kansas on 2 June 1982. She is the daughter of former president of the Major League Baseball American League, Gene Budig.

Kathryn attended Princeton High school. She often participated in plays while in school. She earned her double degree in English and Drama from the University of Virginia.

Before starting her career Budig took the yoga teacher training with YogaWorks co-founders Maty Ezraty and Chuck Miller. She then began teaching at the Yoga Works studio in Santa Monica. Her classes and leads retreats and workshops have gained critical acclamation worldwide.

She featured in ToeSox’s, The Body As Temple ad campaign in 2008. Her first solo DVD Kathryn Budig Aim True Yoga released in 2011. The following year she became the face of Under Armour Women’s Studio Line.

Besides, she is also the author of the books The Women’s Health Big Book of Yoga and Aim True. Further, she contributed to the publications like The Huffington Post and Yahoo! Shine. She is the editor of Women’s Health Magazine. She featured on the covers of Yoga Journal and Yoga International.  As of now, she teaches yoga online at YogaGlo.

The yoga tutor Budig was married to Bob Crossman, a professional skydiving instructor. As a certified skydiver, she has completed more than 100 jumps.  After several years of relationship as husband and wife, they split up and filed for divorce in 2015.

Budig realized that she was a lesbian and a year after her divorce started stating Kate Fagan, a sports journalist. She together with her girlfriend host a podcast on ESPN titled Free Cookie.

Moving on, Kathryn is a philanthropist. In 2007, she co-founded Poses for Paws along with Jesse Schein. She designed a mala as a fundraising effort to benefit the organization. The organization supports The Beagle Freedom Project.

As a yoga star, Budig earns a decent amount from her career. Her annual salary is $100 thousand. She has accumulated an estimated six figure net worth.

Bob Crossman is the ex-husband of Kathryn Budig. The duo separated after several years in a relationship in 2015.