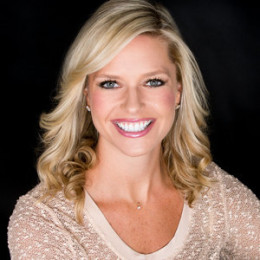 An American sportscaster, Kathryn Tappen is currently single. She was previously married to ice hockey player Jay Leach from 2005 to 2009. Kathryn is the daughter of Sheila and Richard Tappen. She attended Rutgers University on academic and athletic scholarships. Tappen started her career hosting a variety of programs at CSTV in 2003. In 2014, she covered the Winter Olympics, Stanley Cup Playoffs, and Super Bowl XLIX. Kathryn Tappen will join NBC Olympics’ production of the 2018 Pyeongchang.

Kathryn Tappen was born on April 9, 1981, in Morristown, N.J. She belongs to White-American ethnicity. Tappen has a sister named, Amanda.

Tappen attended Rutgers University where she was an Academic All-American and the member of the track and field. She was also on the cross country team and a former record holder in women's steeplechase, 3000m.

Kathryn Tappen's career began after she joined CSTV in 2003. There she served as a host in many programs like The One College Sports Show, 24/7 and At the Buzzer.

She then joined WJAR in Providence, where she worked as a weekend anchor as well as a weekday sports reporter. For her sports feature Swim Meet, she won an AP award. She covered the 2006 Winter Olympic Games in a nightly special as a host.

After that, Tappen's worked for New England Sports Network(NESN) and then served as a host in NHL Tonight, joining NHL Network in 2011. In 2014 she moved to NBC.

The same year the Boston Chapter of Women presented her with the Woman of Inspiration award. Further, she was nominated twice for New England Emmy Awards for sports reporting.

She is working as a sportscaster in NHL Live and NHL Overtime.

Kathryn Tappen has served in the field of journalism for the last 14 years. During her time in the field, she has worked for noted networks such as NESN, NBC and so on. Besides, she has also won an AP award.

According to the online sources, sportscasters in the U.S. are paid a salary of around $76,000 annually. Considering that amount as her base salary, she now probably has collected a net worth not less than a million dollars.

Also, recently this year in 2017, she sold her condo in Charlestown to the Red Sox skipper John Farrell for $1 million.

Kathryn Tappen is the member of the Sports in Boston, Massachusetts, New Jersey, and National Hockey League broadcasters. Kathryn Tappen got married to ice hockey player Jay Leach in the year 2005 but the couple did not continue their marriage relationship and they separated on 18 July 2009.

Tappen's current relationship status has not been revealed on the social sites. She is possibly single at the moment.

She got married to ice hockey player Jay Leach in 2005 but the couple did not continue their marriage relationship and they separated on 18 July 2009.