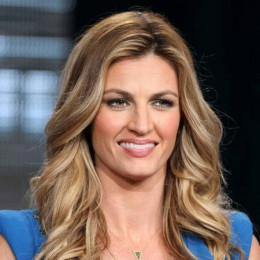 Erin Jill Andrews is an American television host and sportscaster who currently hosts FOX College Football for Fox Sports and the Dancing with the Stars for ABC. She has been a contributor to Good Morning America on the ABC network.

Erin Andrews Married: Who's Her Husband?

Sportscaster and television personality, Erin Andrews and the Canadian hockey player, Jarret Stoll has moved into conjugal life. After getting engaged in 2016, Jarret Stoll married his fiance and girlfriend of five years, Erin Andrews.

They tied a knot in 2017 on Jarret's 35th birthday, and the lavish wedding ceremony was held at Montana. Andrews met her spouse with the help of mutual friend Michael Strahan who managed for their dinner date.

However, Erin shut it down cause she didn't want to be bothered at work. As a matter of fact, Stoll took matters into his own hands. For instance, Jarret figured out he would better try to make a move in person.

The athlete thought of walking with two security guards and bending over a railing to get to the dugout that Andrews was reporting from. Thus, followed by the World Series, the pair went to dinner in Hollywood. Since then, they were inseparable.

Erin Andrews battled with cervical cancer in 2016 which might be the reason she doesn't have any children yet. Yet, the bond between the two became stronger because of her battle.

Prior to ESPN co-host, Jarret was dating the New Zealand born model Rachel Hunter. She has worked for big modeling companies like Harper's Bazaar, Cosmopolitan, Elle, Voge and many others.

They met for the first time in 2006 and engaged in 2008. The lovebirds were set to walk down the aisle in late 2009. Sadly, they had to call off the wedding. Three years after Jarret's canceled wedding to the model, he was single and ready to mingle.

She became a part of a controversy when a man named Michael David Barrett filmed her naked through the hotel room's peephole which went viral on the internet.

How Much Is Erin Andrews Net Worth?

Erin Andrews has an estimated net worth of $22.3 million as of 2019. She receives a salary of $2 million per year.

In the summer of 2016, Andrews sued Marriott, stalker for $75 million over the 2008 nude video.  Back in 2016, she was awarded $55 million in a civil suit against Barrett and one of the hotels where Barrett captured the footage.

Midst the second day of her testimony in the civil trial, Erin cried while explaining that the violations she underwent almost destroyed her relationship with Jarret.