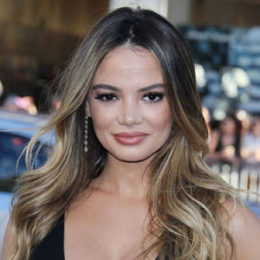 Keleigh Sperry is one of the successful and renowned social media personality and model. She came to limelight through Instagram where she is in friend list with celebrities like Jessica Szohr, Nina Dobrev, Taylor Swift, Selena Gomez and so on. Also, she is TV series actress and has made an appearance in movies and TV series such as Dance, E! Live from the Red Carpet and Opeth: The Devil’s Orchard. Currently, she is in a love relationship and is engaged to her boyfriend of four years, Miles Teller.

Keigeigh Sperry was born on 16th October 1992 and grew up in the city of California. She is a sibling sister of Katie, Michelle, Kevin, Brian, and Christie. She is an American citizen and belongs to white ethnicity.

From childhood, she was interested in acting and modeling, and soon she began her career as an aspiring model. She apparently represented L.A. Talent which specializes in on-camera commercials.

She is signed with One Management, an entertainment agency that focuses on clients in the film, music, and fashion. It’s headquarter is located in New York. Also, she along with 13 other model has posed for a snap in hot pink called Team Bride swimsuits.

In her Instagram, she has posted several photos with celebrities including Nina Dobrev, Selena Gomez, Taylor Swift, Jessica Szohr and so on.

Apart from social media personality, she is also an actress and has made her appearance in the TV series including Dance, E! Live from the Red Carpet and Opeth: The Devil’s Orchard.

Keleigh got engaged to longtime boyfriend, Miles Teller, on 20th August 2017. Miles took her thousands of miles away from home to propose to her. The couple flew to South Africa for a random trip and jungle safari.

It was Keleigh’s sister who shared the picture of Keleigh and Miles engagement on Instagram. The couple together looks stunning, and timely appears together in public and also appeared in red carpet as well.

The boyfriend-girlfriend started dating since 2013 and had maintained a good relationship with each others family too. It has been nearly four years that they have been together and soon they may get married.

Keleigh has just begun her career as a social media personality. Though she has just started her career, she has collected huge popularity among the viewers. She has over 119k followers and more than 5,073 followers in Twitter account. Though her net worth is not revealed yet, looking at her lavish lifestyle, she probably enjoys good sum of net worth.

Talking about her fiancé Miles Teller’s net worth, Miles has successfully collected an estimated net worth of $12 million.