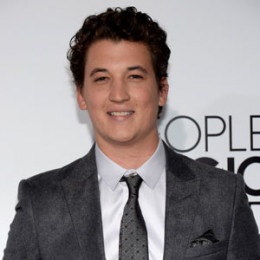 Miles Alexander Teller, better known as Miles Teller, is an American actor. He is better known for his role in the hit movies like Bleed for This, The Spectacular Now, War Dog. He also appeared in the American superhero film based on the Marvel Comics, Fantastic Four. Currently, he is in a love relationship with Keleigh Sperry, and the couple recently got engaged while on an African Safari over the weekend.

Keleigh Sperry is the fiancée of Miles as they got engaged on 20th August 2017. The couple started dating since 2013, and after three years of relationship, the couple got engaged while on an  African Safari.

It was Sperry’s sister who quickly shared the picture of Sperry and Miles on Instagram.

Miles began his career as an actor and appeared in short movies such as Moonlighters, A Very Specific Recipe, The Track Meet, and The Musicians.

After playing different roles on the small screen, he appeared in TV comedy-drama television series, The Unusuals, in 2009, his debut. It starred Amber Tamblyn, Jeremy Renner, Harold Perrineau, Adam Goldberg, Terry Kinney, Joshua Close and so on.

In 2010, he played in the American drama movie, Rabbit Hole, directed by John Cameron Mitchell. The film starred Nichole Kidman, Aaron Eckhart, Dianne Wiest, Tammy Blanchard, Sandra Oh and so on. It premiered at the Toronto International Film Festival 2010.

Though he played different roles in the movies, his role Sutter Hewitt in the romantic comedy-drama movie, The Spectacular Now, rose his popularity among the viewers. He received Sundance Film Festival Awards and won nominations for MTV Awards, Indiana Film Critic Association, and Alliance of Women Film Journalists.

He then appeared in the American superhero movie, Fantastic Four, directed by Josh Trank. The film starred Michael B. Jordan, Kate Mara, Jamie Bell, and Toby Kebbell. It grossed $168 million at the end of the year.

Moreover, in 2016, he was cast in the movies including The Divergent Series: Allegiant, Get a Job, War Dogs and Bleed for This. His next flick and most awaited movie are Only the Brave and Thank You for Your Service.

Miles Teller was born on 20th February 1987, Downingtown, Pennsylvania, U.S., to parents Mike and Merry. He grew up along with two sibling sisters: Erin and Dana. His grandfather was Russian Jewish, and he also belongs to English and Irish ancestry.

His parents moved to Citrus Country, Florida when Miles was 12. He attended Lecanto High School and used to play Alto Saxophone in a rock band plus he was a drummer for a church youth group band and was a president of the drum club. Further, Teller plays the guitar and piano as well. He is also a basketball player.

He passed with a degree in fine arts from Tisch School of the Arts at New York University. Later, he studied method acting at the Lee Strasberg Theater and Film Institute. When he was at the university, he worked as a server at a restaurant named Crackers.

In 2007, Miles was a passenger in a car that lost control at 80 mph. It flipped eight times, and he ejected out the window.

Again in 2016, he along with his girlfriend, Keleigh was involved in a car accident. After an Uber driver, cut them off, Miles' car tilted onto its side. Somehow, the couple didn't suffer any injuries from the crash, but the passenger in the Uber car was taken to the hospital.

Miles has successfully earned a lucrative amount of net worth of $12 million.

Miles Teller shared a screen with opposite Aubrey Plaza, Jenny Slate, and Stephen Merchant in an animated movie, The Ark and the Aardvark.